Suddenly I remembered all those years we every winter went to Fryksås in Dalarna,  and stayed at the Fäbodvall in a typical old cottage from the 19th century – or older. When I look up Fäbod in English, it says shieling/sheeling – small huts were farmers used to spend their summers in the mountain pastures, looking after their cattle.

We used to go skiing in the hills and the dogs had great fun. The children were not that old, so they went skiing with us, but also used the hills for other ways of sliding down on the snow… 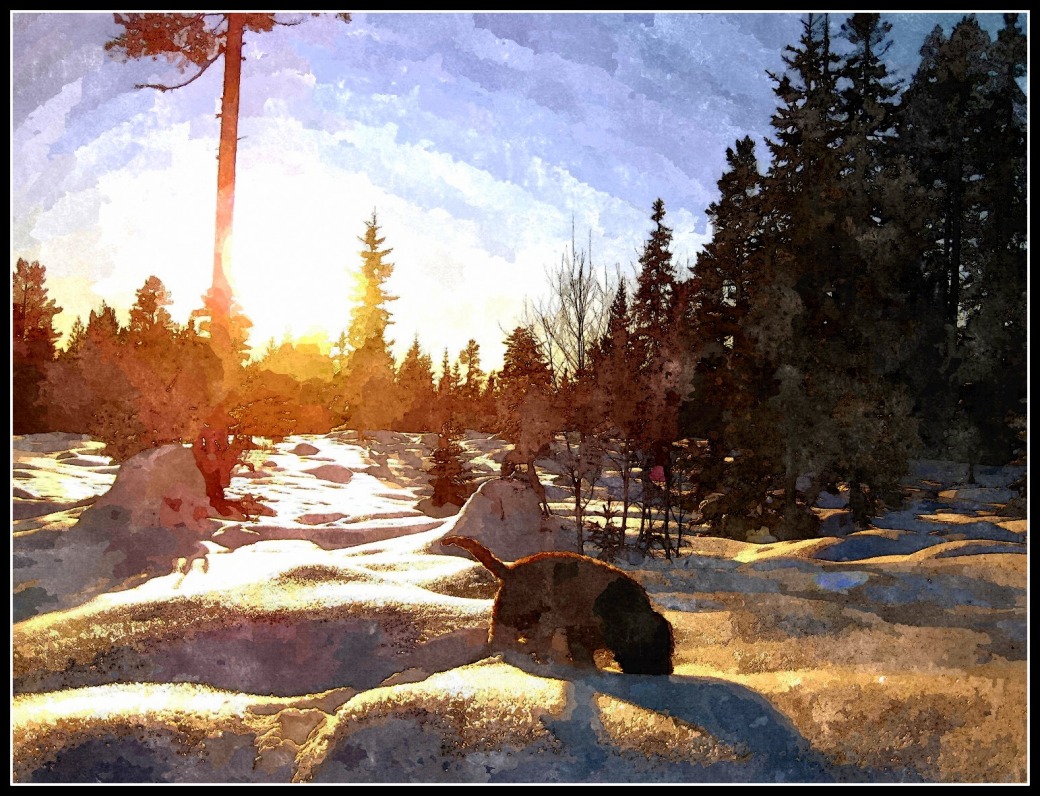 And I miss those days. No TV or radio, no electric lights – only the sun and candle light. The long evenings after skiing and playing in the snow, we played card games or board games, and read books together. The beds for the children were still like in the old days, called skåpsängar – in English box-beds or closed beds.

We all loved it. We kept going there until 2010. And do you know – the children  never missed their electric gadgets, and neither did my husband or I.

Through my father, I found a new forest to hike – an area where he used to work and walk when he was younger. If you want to, you can follow me, Totti and Milo!

Looking at the weather forecast, I chose a glorious day. And it was, from the start.

Night fallen snow and no wind. Blue promising skies with a cold sun.

Some 5-6 kilometers into the hike, I found the ruins of what once had been a cottage of my father’s. He used to stay there during the summers in the late 1940’s.

The stones rested in an open space, where now only brambles and old cherry trees, birches and lonely beeches were left to themselves. A silent and beautiful place.

Store Damm – Big Pond. This vast pond was recreated as part of a wetlands project from 2002 to 2006 with the help of old maps. The pond was drained just before 1920, but prior to that, it supplied hydro power to small-scale industries in the area.

The draining was done so that spruces could be planted, but the majority of these were downed by Hurricane Carola in 1999. Today, dead trees are still rising from the water.

Somewhere on the path here, Milo happened to venture down into a snow covered mud pool… so we had to keep moving faster because of the cold.

We also encountered wild boar hunters with dogs running around us – not that pleasant, but we have far too many wild boars here, so I hope they got some of them.

A glorious hike anyway, from where some earlier posts, Wednesday and Sunday,  have borrowed photos.

In the late evening, Milo ”dropped his tail” and suffered from something called ”wet tail”. This problem might occur if the dog gets too wet and cold. A Spaniel and Retriever phenomenon mostly. I understand it hurts a great deal and he did not want to do anything at all after dinner. I had to let him out several times during the night, but the next evening he was – Tail Up again!

We had some snow that year, 2015, and glorious winter days.

Cold and Warm – these shots are from an early morning walk some years ago.

– and the sun threw golden diamonds in the snow

I opened my eyes this morning, to the finest jewellery –

– a crystal brooch, and hidden light and glory

… in the frosty autumn leaves