“In wildness is the preservation of the world.”  – Henry David Thoreau

Tina encourages us this week to go Wild! And, this time of the year I spend as much time as possible outdoors, in the wild, so my decision was easy – to go for my own neighborhood and use the most common meanings of the word Wild (according to Wikipedia) –

Wild animal – I met this lovely deer on my morning tour a couple of days ago. She noticed me of course, but waited patiently in the sunlit glade until I was gone. 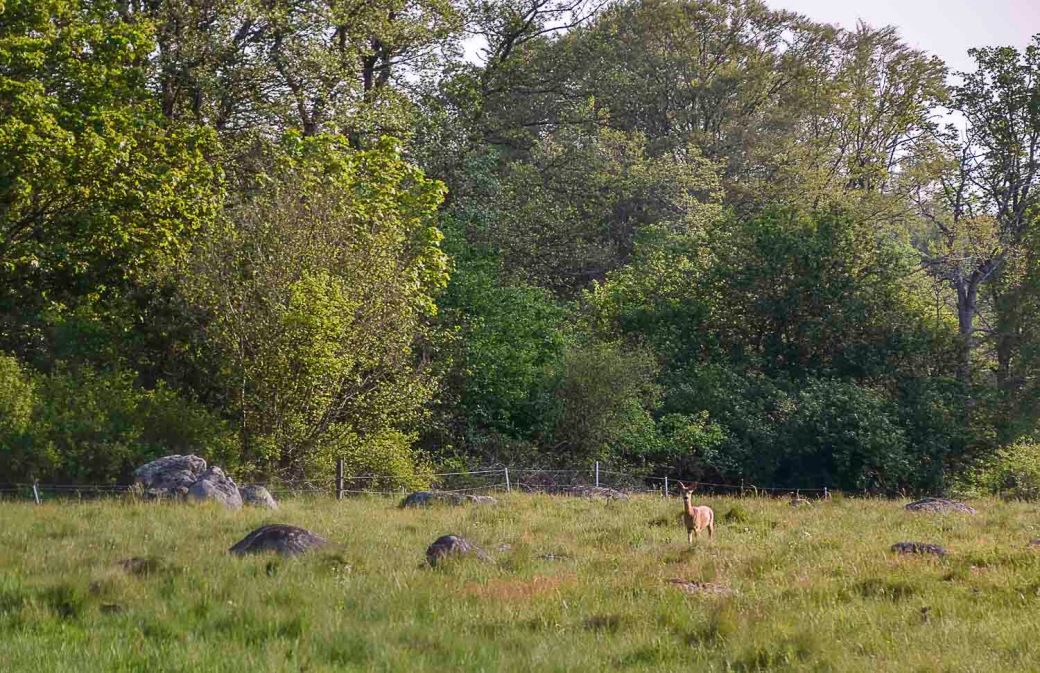 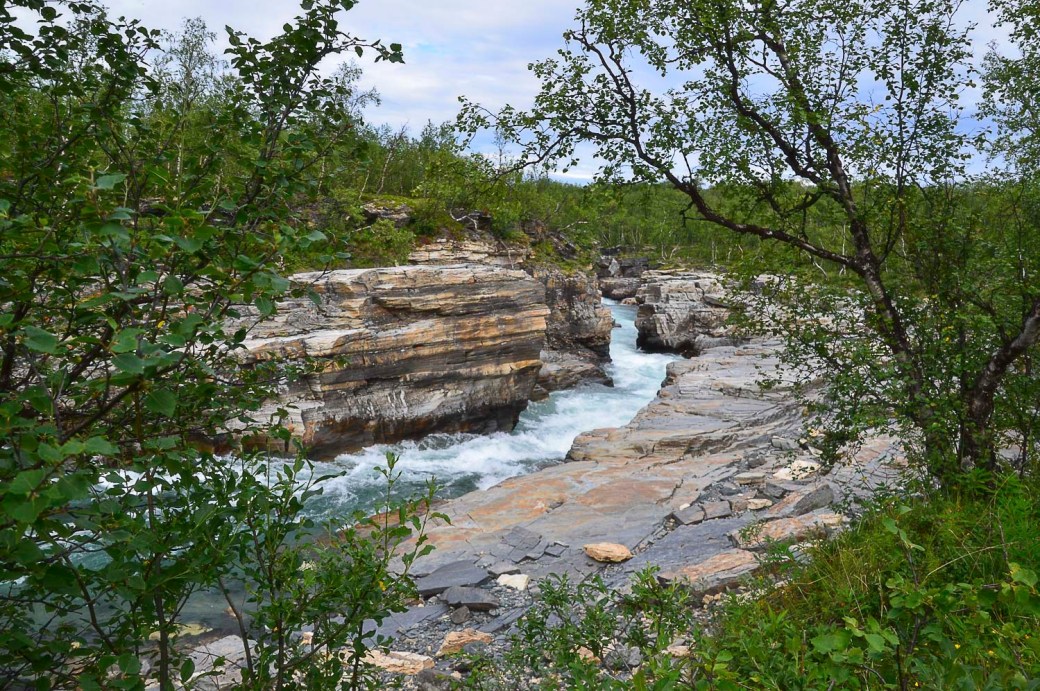 Wildlife traditionally refers to undomesticated animal species, but has come to include all organisms that grow or live wild in an area without being introduced by humans. Represented in the header by a wild rose. 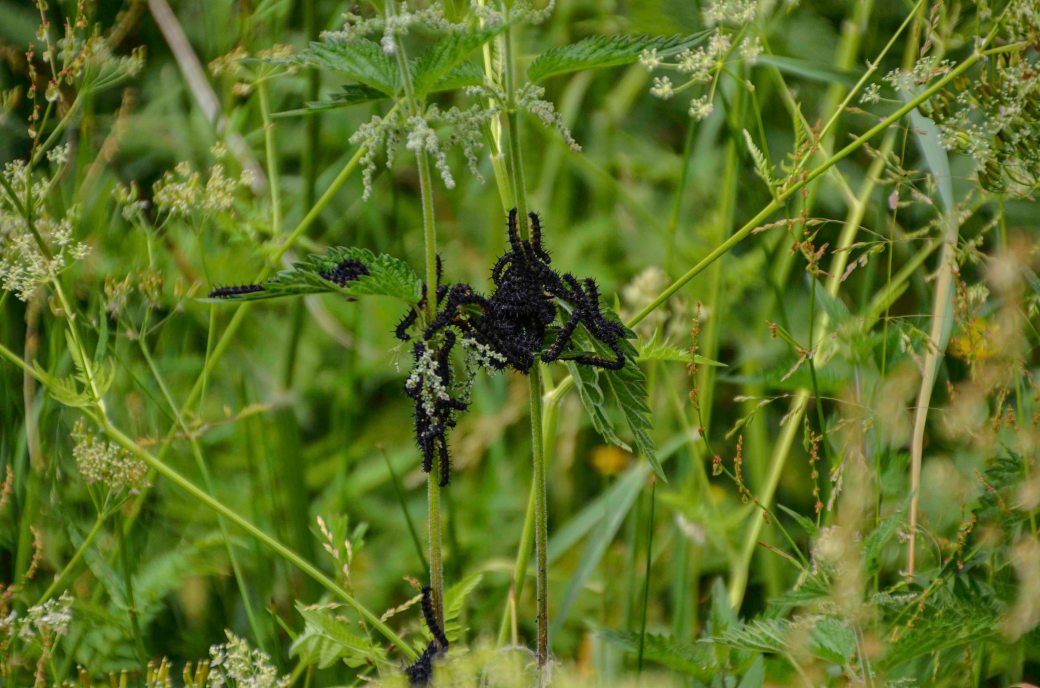 One of the most fascinating things in the wild is the metamorphosis of butterflies. Here some caterpillars of the small tortoiseshell, feeding on stinging nettles… 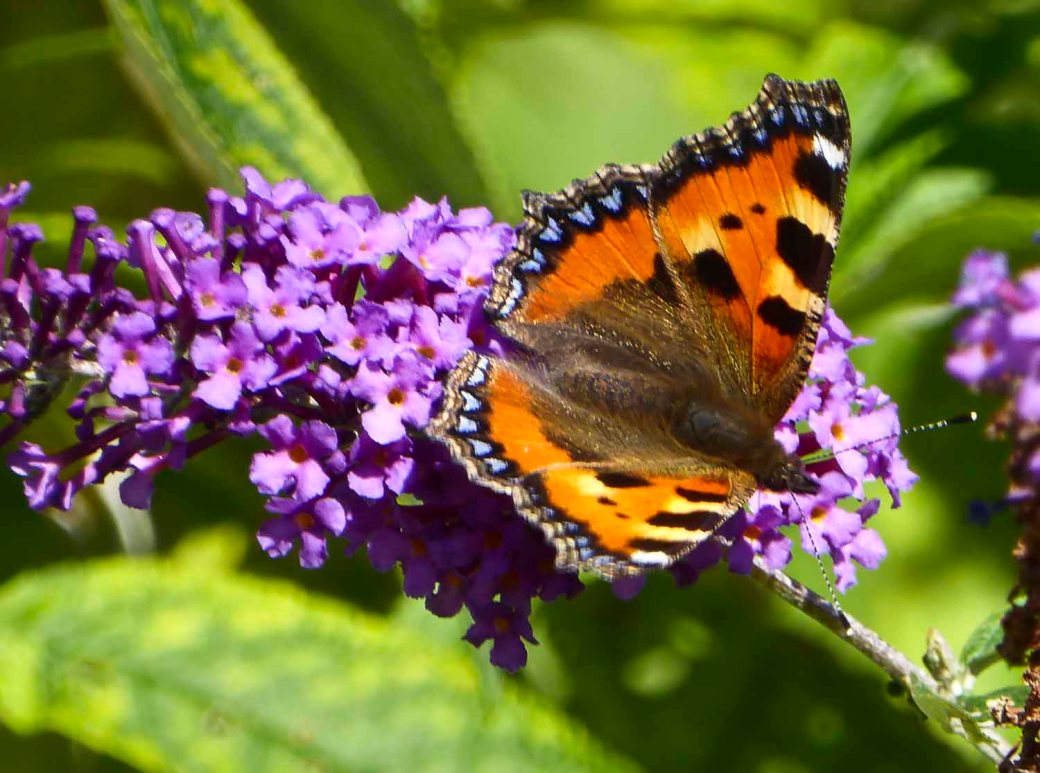 …but later developing into these beauties – Wild Wonders!

Finally, Wildness – the quality of being wild or untamed……easily recognizable even in domesticated animals – such as my dogs running and chasing each other like maniacs.

Would you like to go wild for a moment? Welcome to join in! Tag your entry ”Lens-Artists” so we can find you in the reader. And stay tuned for next week’s host, Patti, for challenge #49!

For this week’s challenge, Patti has chosen History. At first I wanted to write about Riga, the capital of Latvia, whose history begins as early as the 2nd century. But inspired by a visit there, I have chosen a piece of puppetry history instead – an art form very much alive in Latvia. 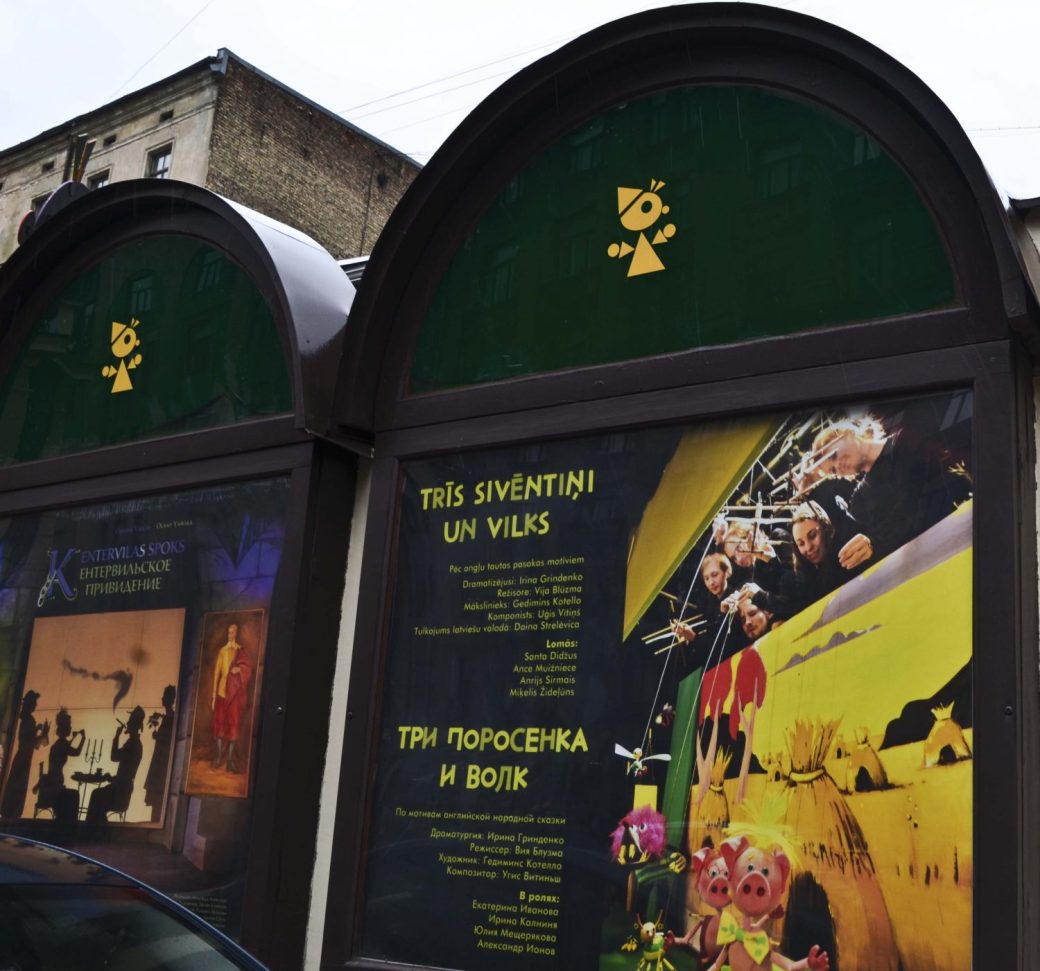 According to Wikipedia, puppetry is a form of performance that involves the manipulation of puppets – inanimate objects, that are animated or manipulated by a human called a puppeteer. The puppeteer uses movements of his/her hands, arms, or control devices such as rods or strings to move the body, head, limbs, and in some cases the mouth and eyes of the puppet. The puppeteer often speaks in the voice of the character of the puppet, and then synchronizes the movements of the puppet’s mouth with this spoken part.

The earliest puppets probably originated in Egypt, where ivory and clay articulated puppets have been discovered in tombs. Puppets are mentioned in writing as early as 422 B.C.E. In ancient Greece, Aristotle and Plato both made reference to puppetry.

This art form occurs in almost all human societies where puppets are used for entertainment through performance, as sacred objects in rituals, as symbolic effigies in celebrations such as carnivals, or as a catalyst for social and psychological change in transformative arts.

There are many different varieties of puppets, and they are made of a wide range of materials, depending on their form and intended use. They can be extremely complex or very simple in their construction. The simplest puppets are finger puppets and sock puppets. Familiar examples of hand puppets are Punch and Judy. Marionettes are suspended and controlled by a number of strings, plus sometimes a central rod attached to a control bar held from above by the puppeteer. 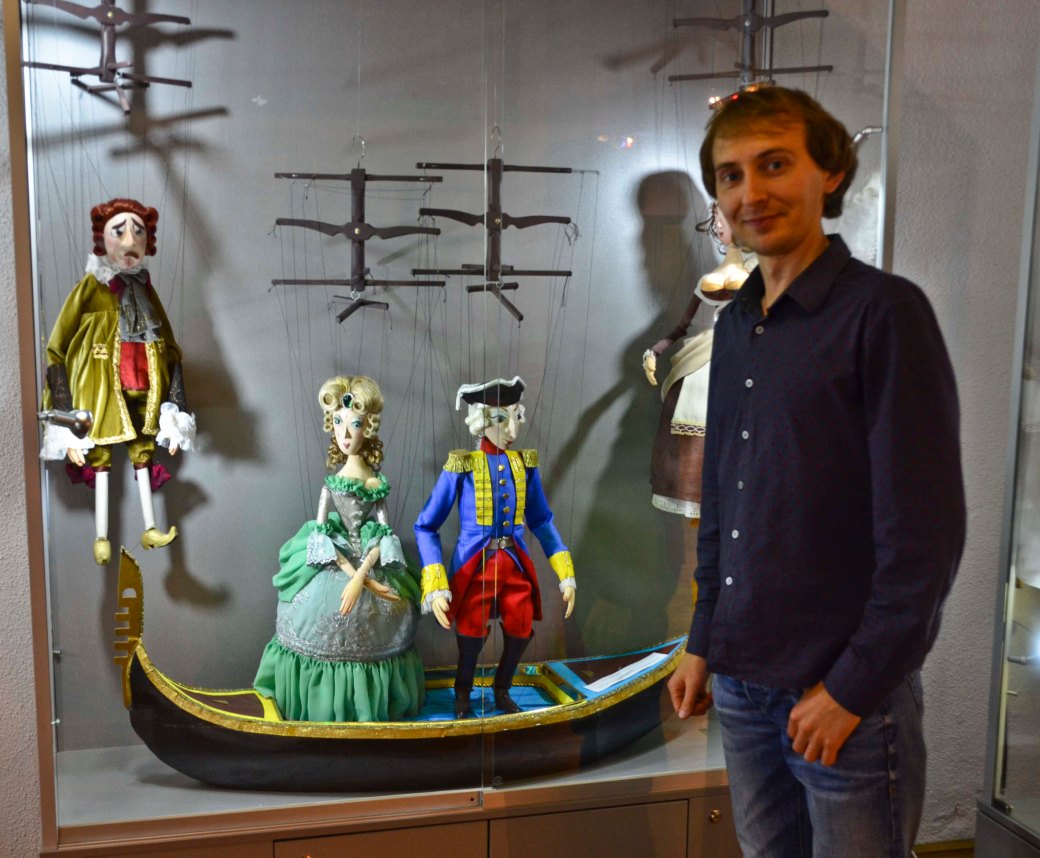 In Riga, we just happened to walk past the puppet theater, went inside and met – Alexander! A charming young man who showed us around and tried to explain, in broken English, about the theater and the puppets. These special ones behind the glass were handled by him alone. You can see him at work as a puppeteer in the poster shot above.

Some more history of puppetry

Many types of folk art puppetry developed in disparate regions of the world, and some are still practiced today. In Japan, the sophisticated bunraku tradition evolved out of rites practiced in Shinto temples. The Vietnamese created the unique practice of water puppetry, in which wooden puppets appear to walk in waist-high water; this was originally developed hundreds of years ago as a response to the flooding of rice fields. Indonesian shadow puppets are another example of a long-held folk tradition. Ceremonial puppets were also used in several pre-Columbian Native American cultures.

In medieval Italy, marionettes were used in the production of morality plays by the Christian church. The famous comedic puppet tradition of commedia dell’arte evolved in the face of censorship by the church. Later, the plays of William Shakespeare were sometimes performed with puppets in place of actors. 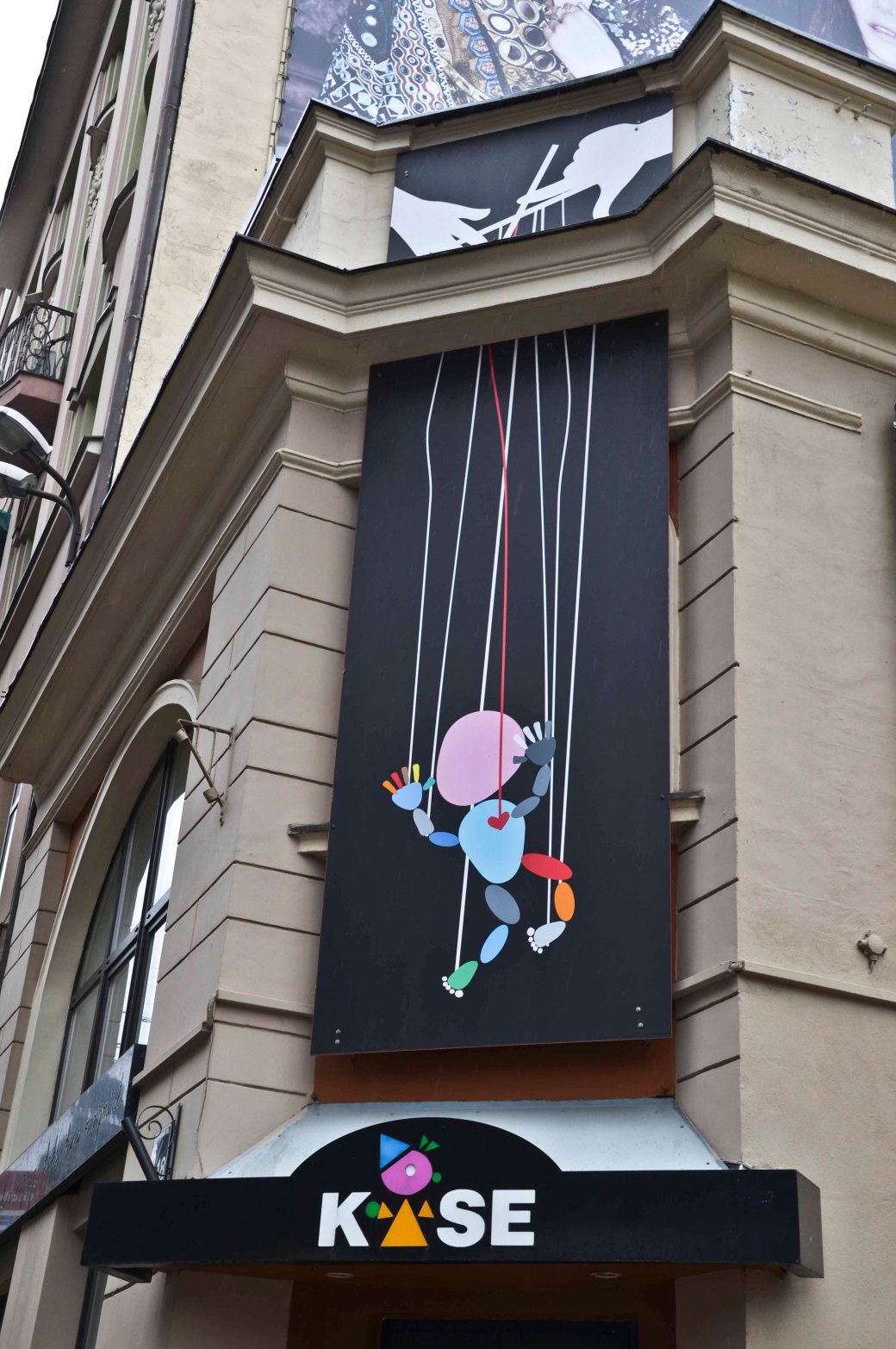 In Sweden there is no great tradition of Puppetry, but it still exists as an art form for small children. In Latvia they have several performances every day. For both young and older children – and for adults as well. Do you have this art form in your country? 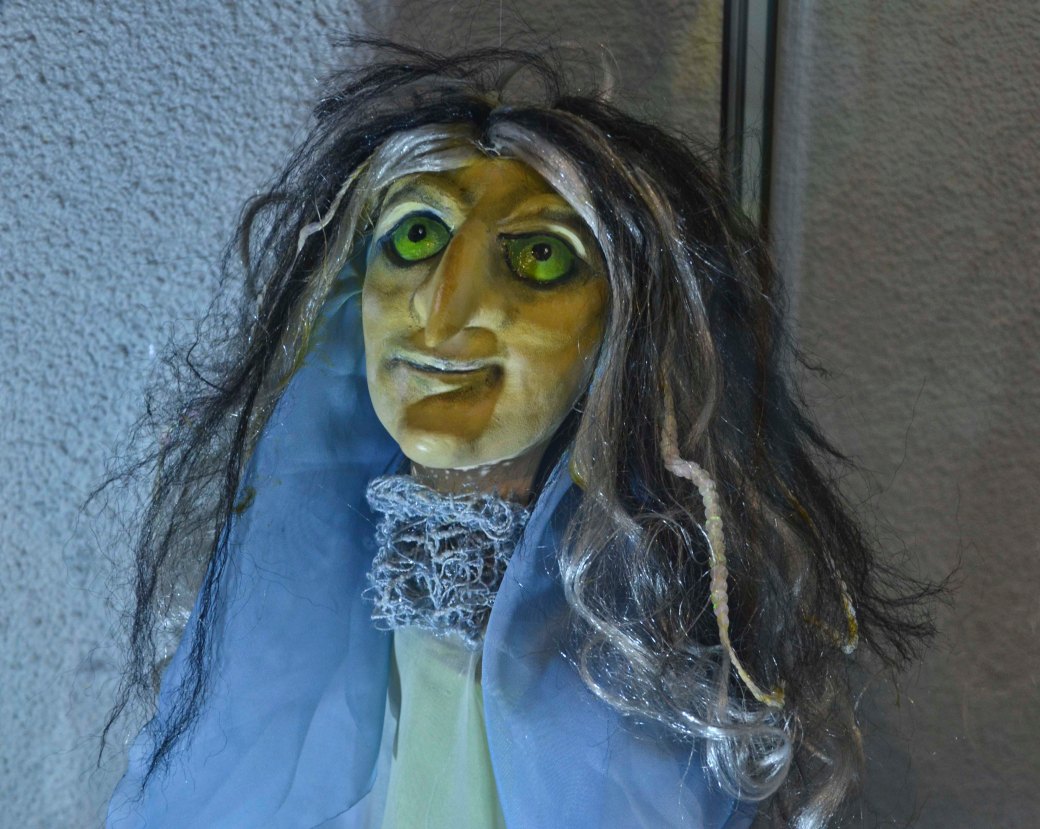 Nowadays the Art of Puppetry is experiencing something of a real renaissance all over the world, touching hearts and minds and engaging new spectators of all ages. Puppetry is a unique cultural treasure, which invites you to experience such a magical way of art that cannot be created or substituted by any other form of art. The task of our puppet theatre is to introduce this special kind of theatre arts in such a way, that the wonders of puppetry world would find their home in the heart of every child. 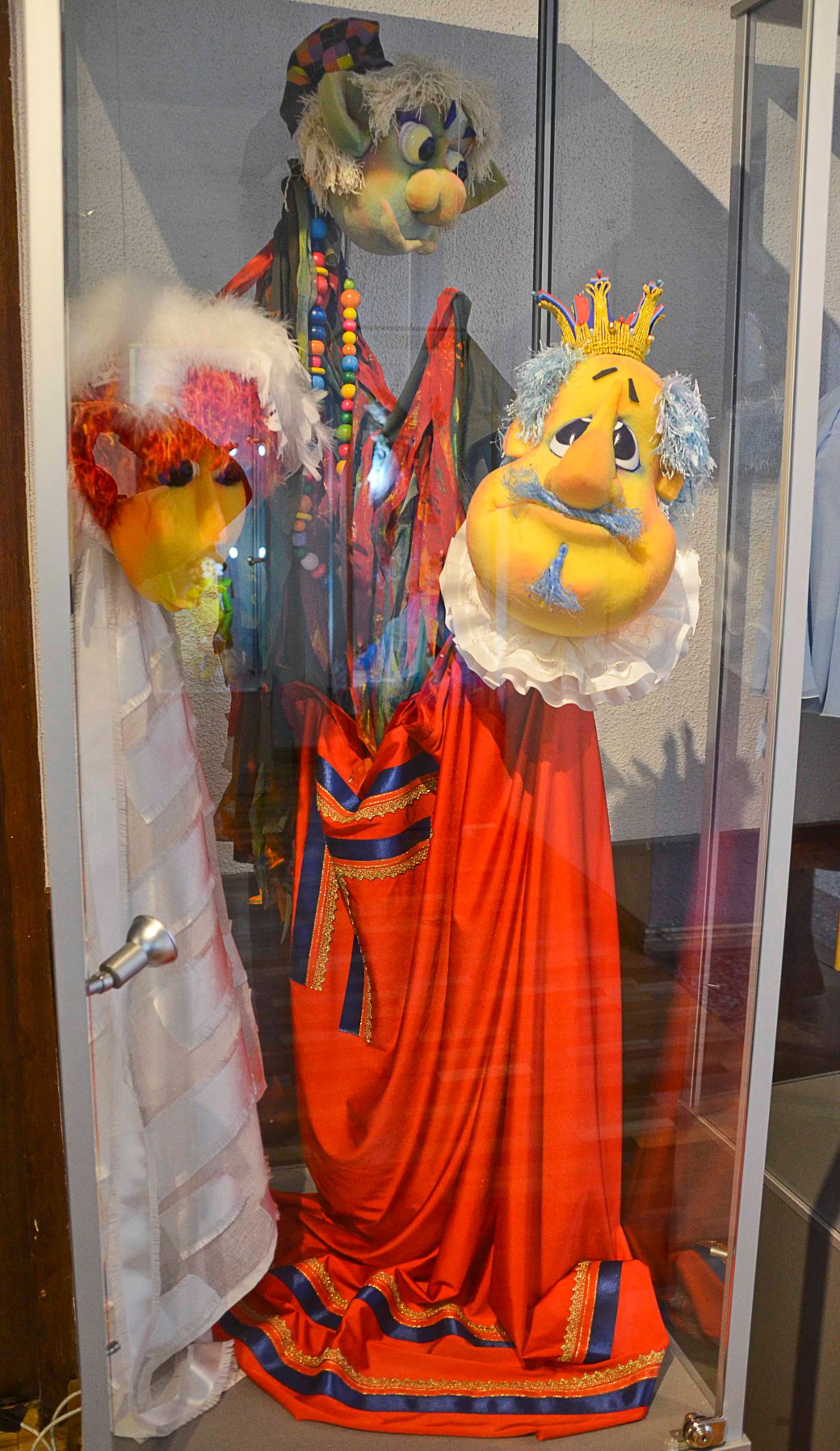 Finally, some history of the theater in Riga

The early beginnings of the Puppet Theater date back to 1942, when during the war the National Art Ensemble of the Latvian SSR ( Latvian Soviet Socialist Republic) was formed in the city of Ivanov in Russia. From there originates a group of puppeteers, whose shows were watched by evacuated soldiers and Latvian people. On the 4th of October 1944 the National Puppet Theater of the Latvian SSR opened, run by poet Mirdza Ķempe and writer and translator Jānis Žīgurs.

Thank you to Patti for letting us share so many things, events and places of historic interest. Welcome to join in the historic tour! And please don’t forget the tag Lens-Artists so people can find you in the reader! 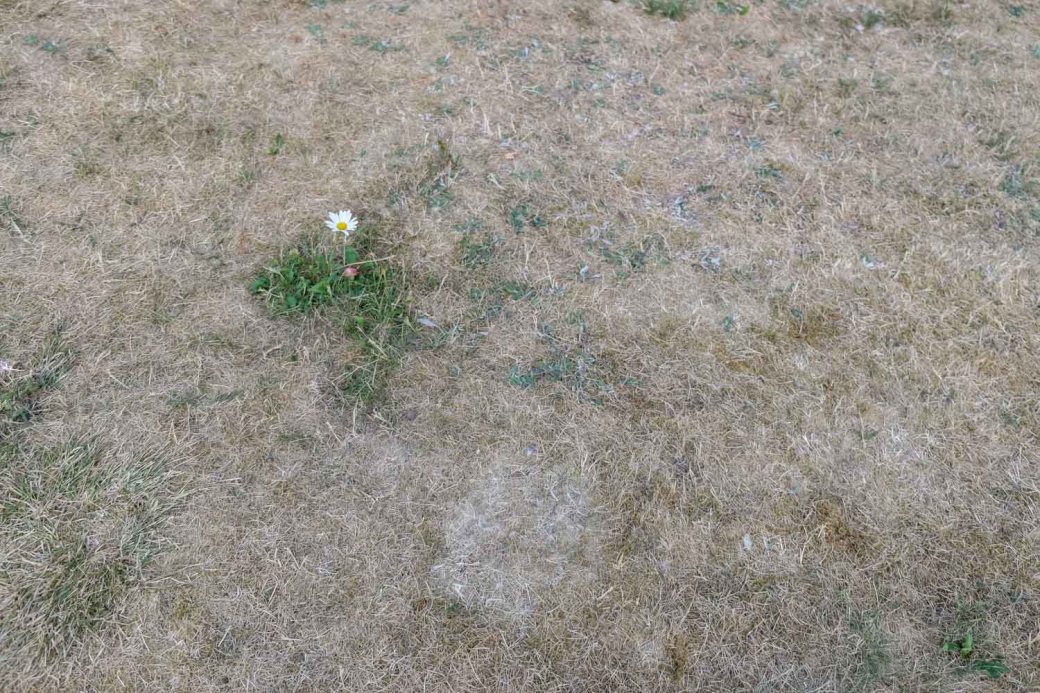 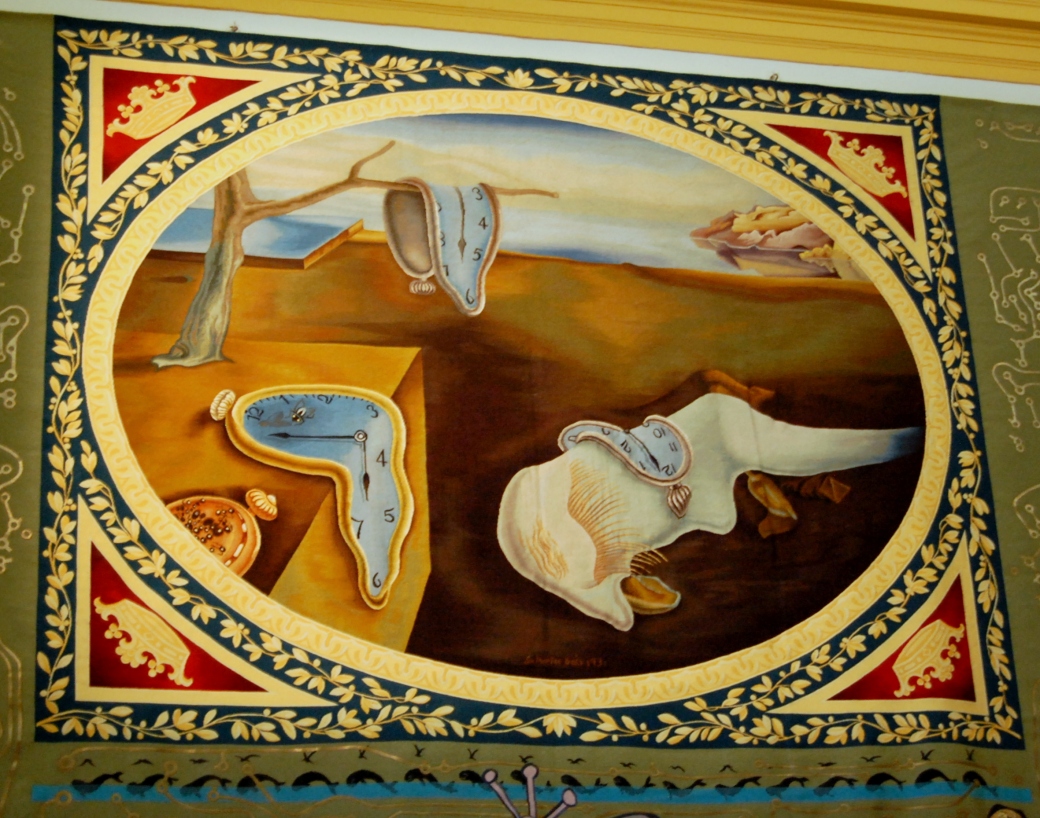 The world is spinning – round. But not much is really, really round, is it? For Frank: 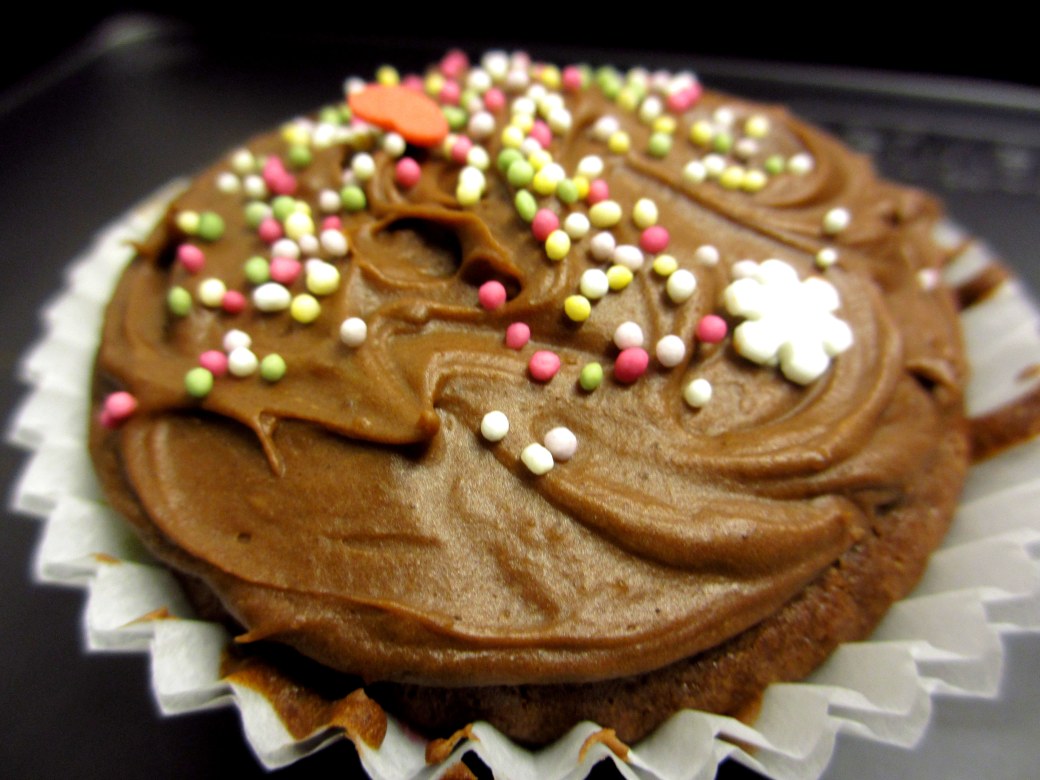 Still, there are many quite round things that I really love…like Dalí’s art and his home in Figueres, Spain. And the Beehive in Kew Gardens! 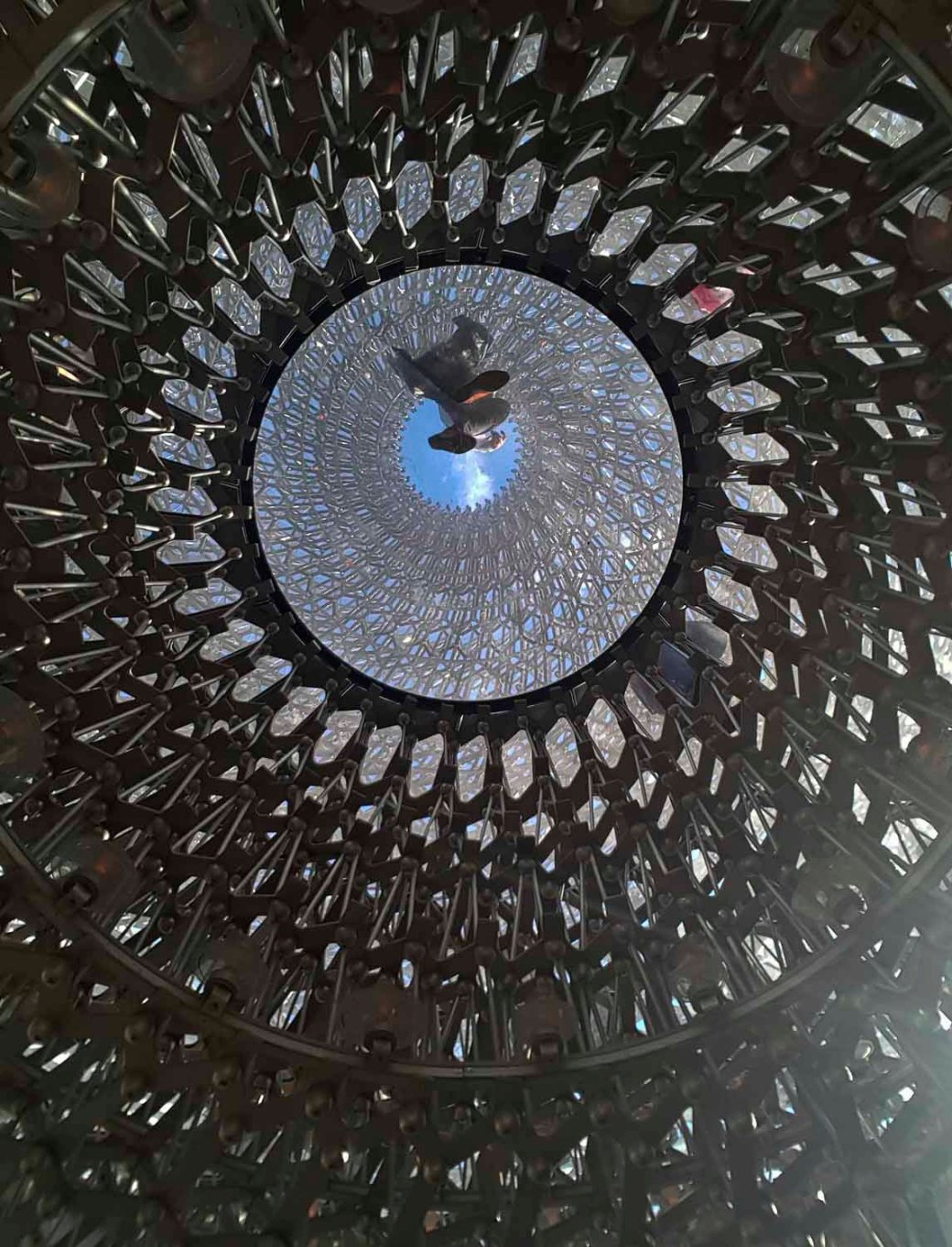 This week Frank, at Dutch Goes the Photo, challenges us to find some layers.

The glaciers of New Zealand provide magnificent layers in stone, and as a contrast,  colourful clothes can also be displayed in layers. A bit less sustainable though… 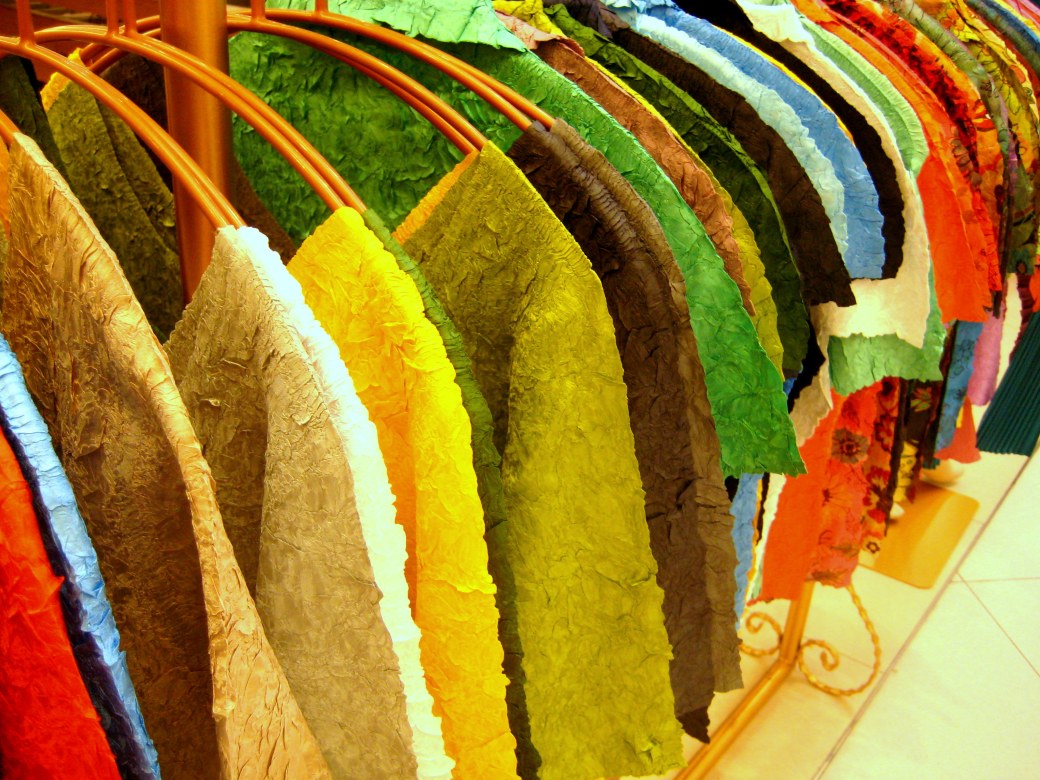 All my favorite colours I find in my garden – in the header. And here is my favorite flower. 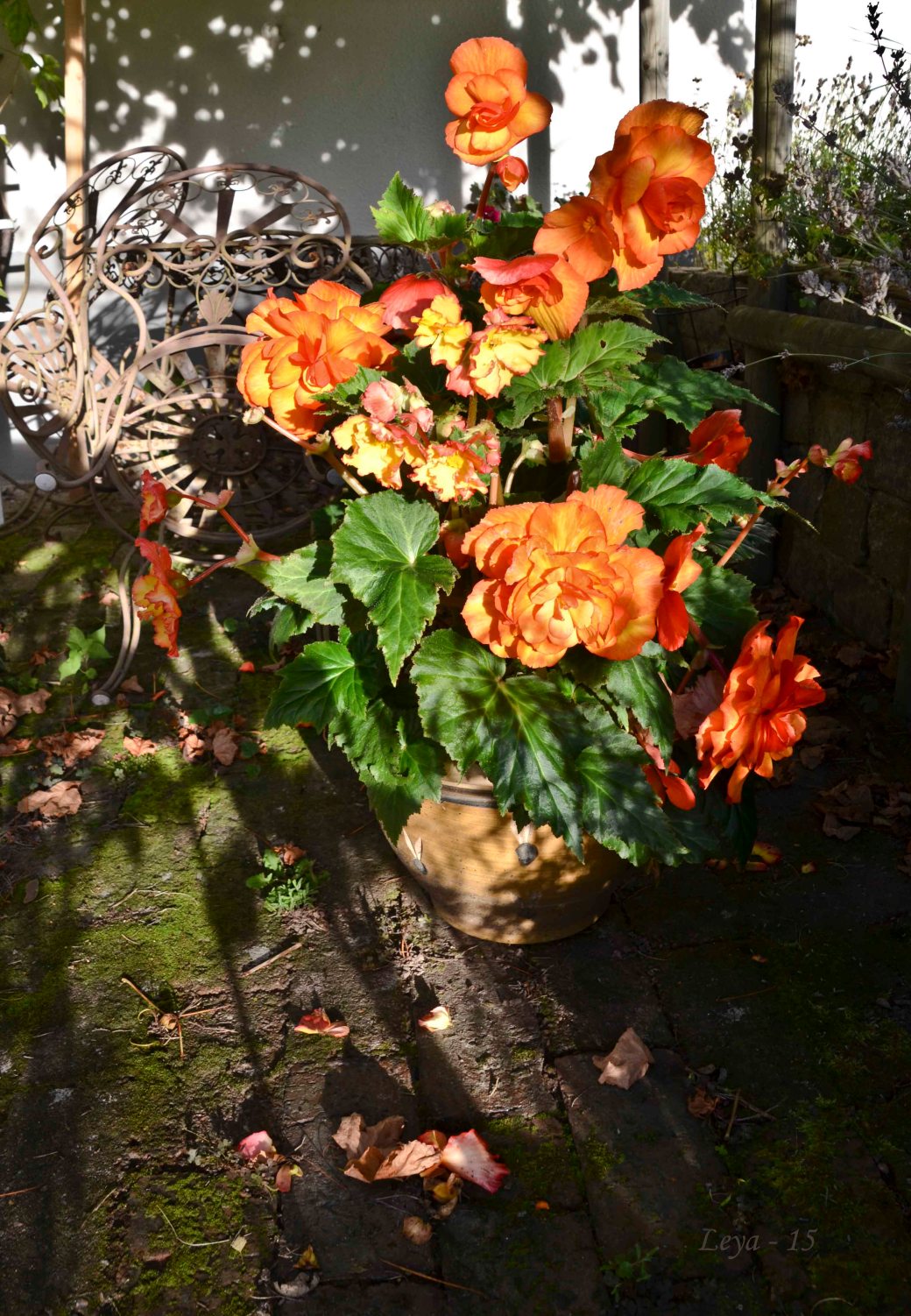 Amanda asks us to revisit this Friendly Friday, and I have chosen Iceland. We have visited several times, and never tire of this magical saga country. This summer we are going back again, to the western part of Iceland, and to revisit Vestmannaeyar. 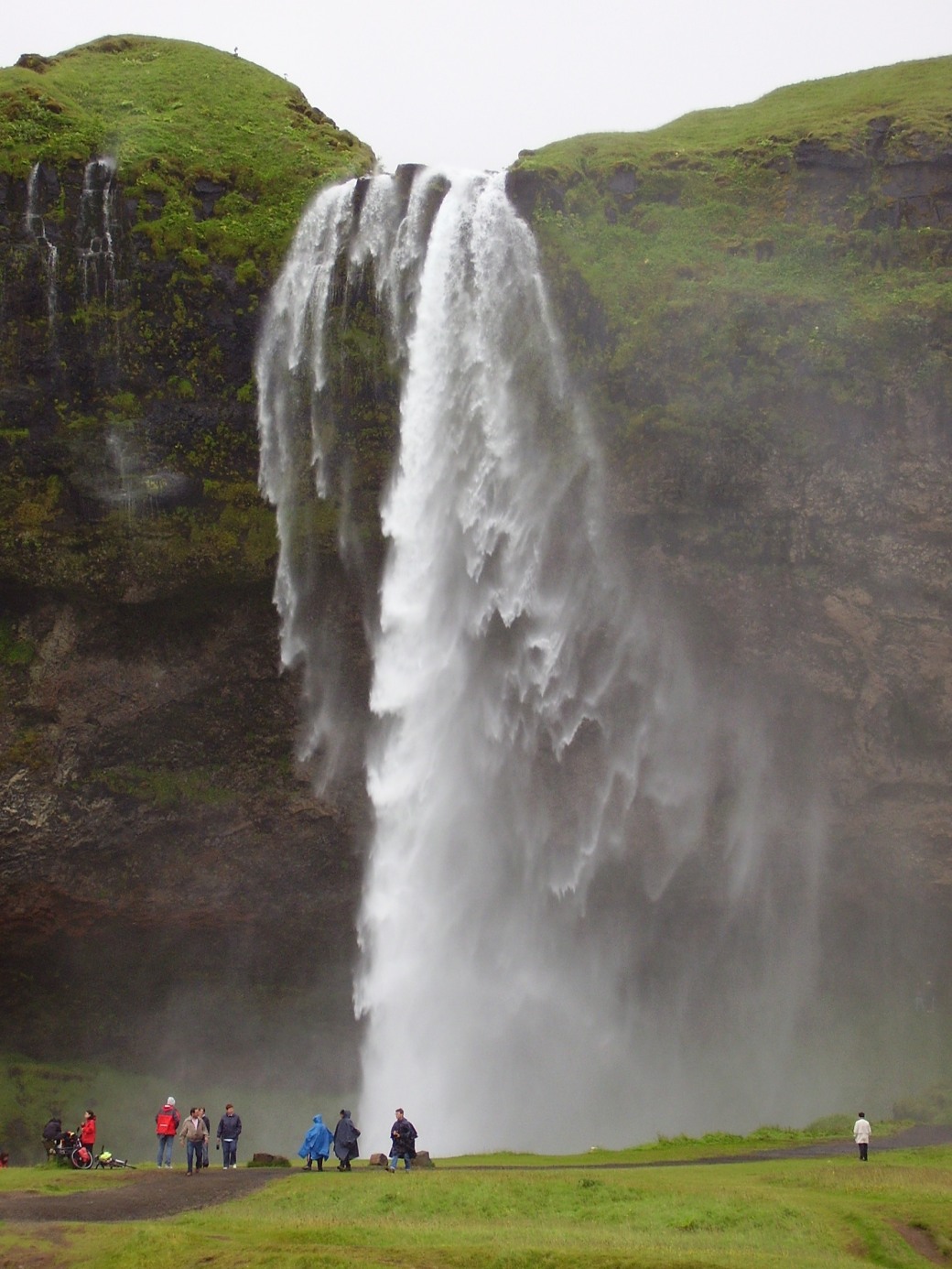 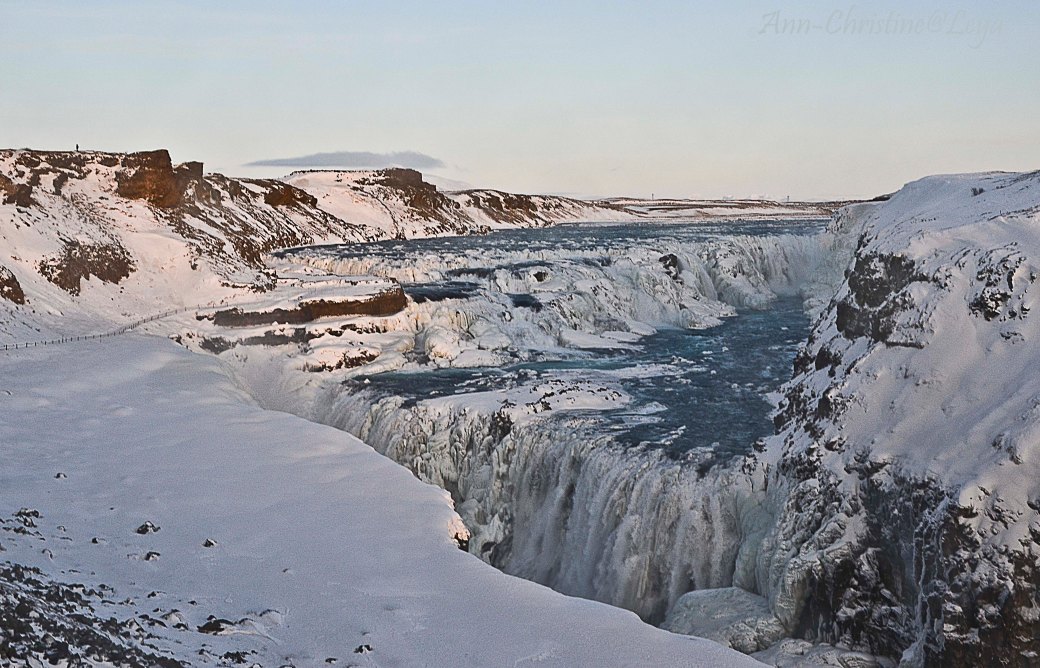 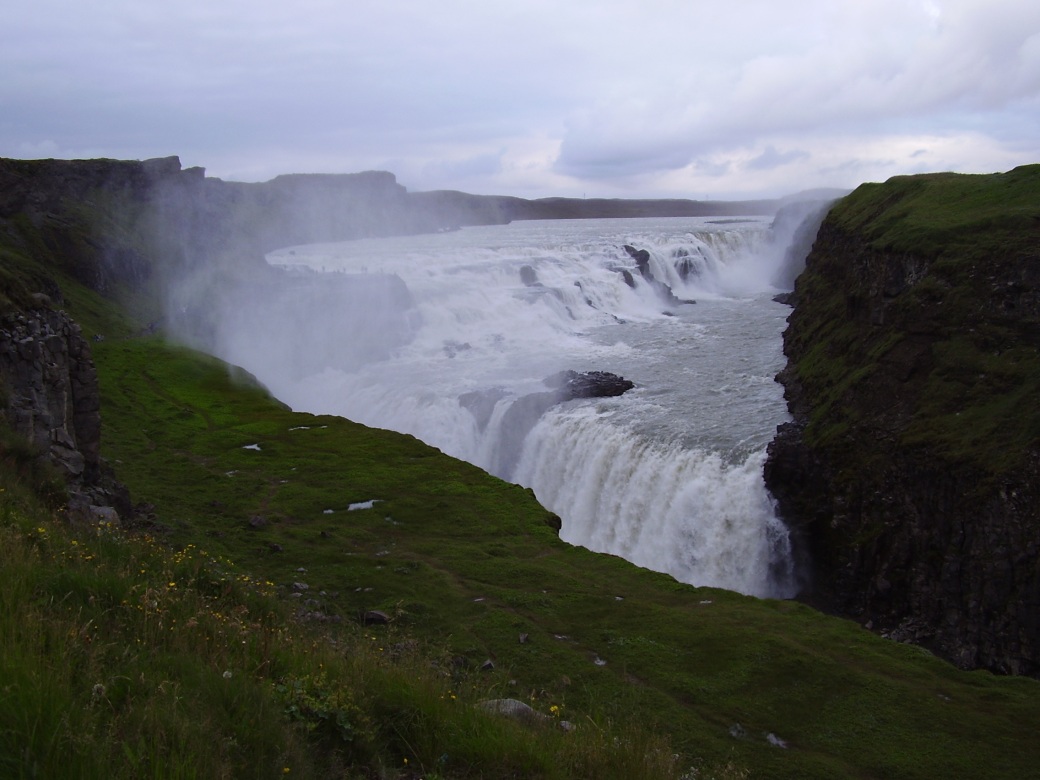 And the mesmerizing lava fields, 2006, just have to have it again! 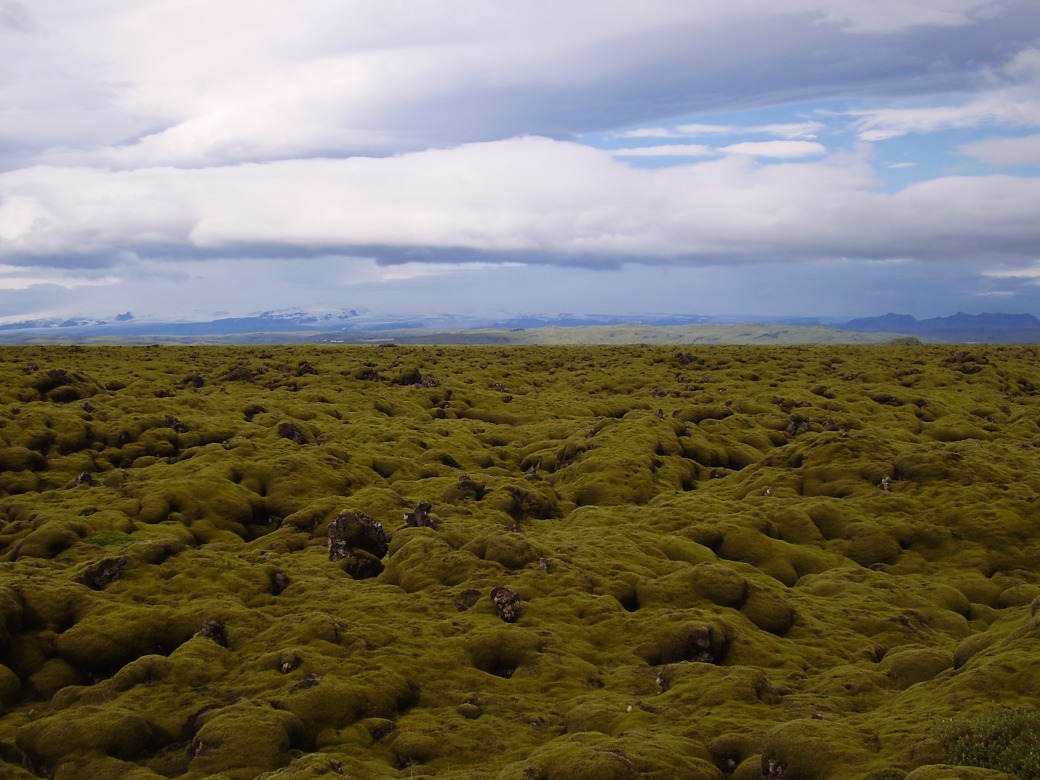 Thank you, Amanda, for a chance to remember and revisit!

My post from November 30, 2017, a year ago – I thought a reminder to us all would not hurt. What do you want to give your children and grand children for the future?

Every December I remember our month in New Zealand some years ago. Never have I been to a country where I found so much and so many to admire and love.

This is where our antipodes live, this is where I had one of my first penfriends, this is the country whose nature I believe to be the most diverse and beautiful in the world. And this is where Rainbow Warrior went down, sending many people around the world into an unbelievable state of shock.

We are constantly reminded of how much we contaminate our world, and the focus here in Swedish media, right now,  is the sea, the oceans. 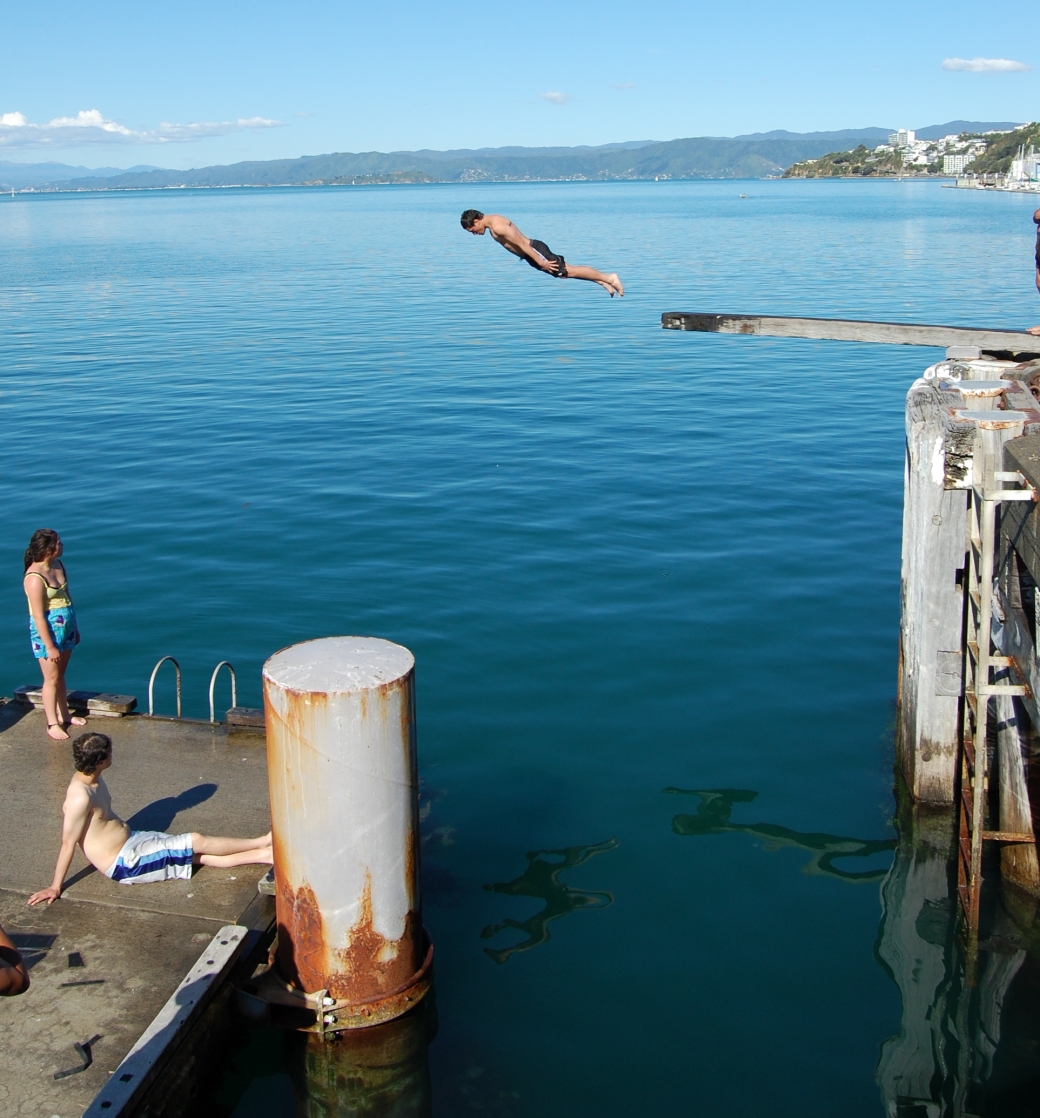 Just like in Wellington, we can still bathe, swim and fish in Stockholm – but for how long?

I am a member of many organizations trying their best to help preserving our planet for generations to come. But right now, we receive news every day about all the plastic and micro plastic in the oceans – a terrible threat to all organisms- 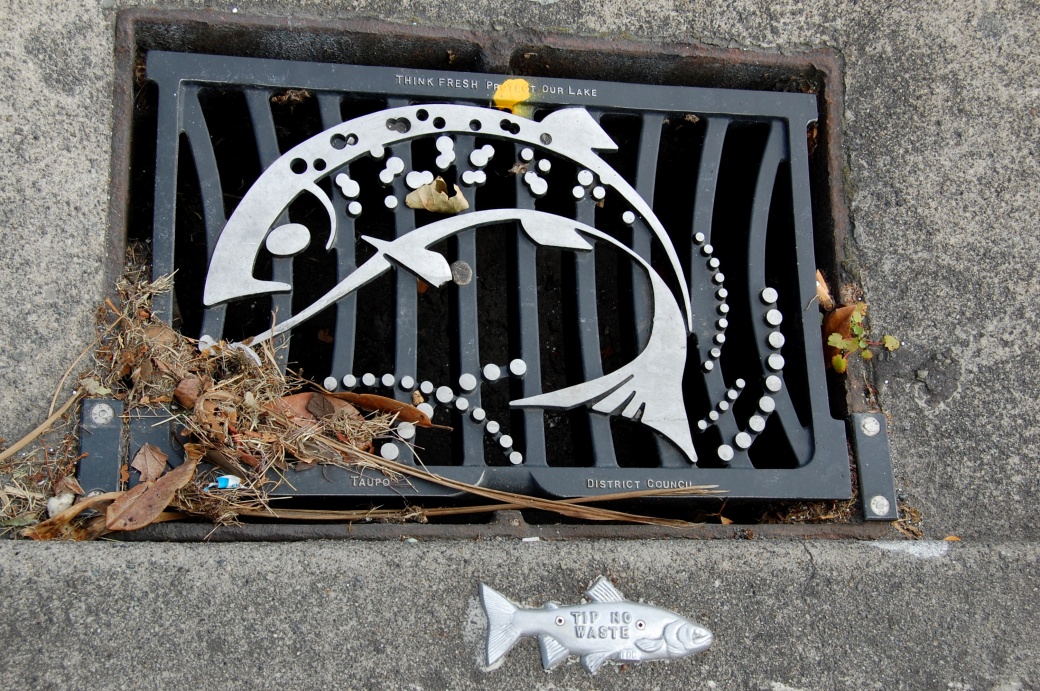 So, I think again, with my heart wide open, about how much I respect and love NZ, its people and its genuine efforts to help the world stay healthy. Down to every detail… for example the artwork made for making us humans see and do the right things. 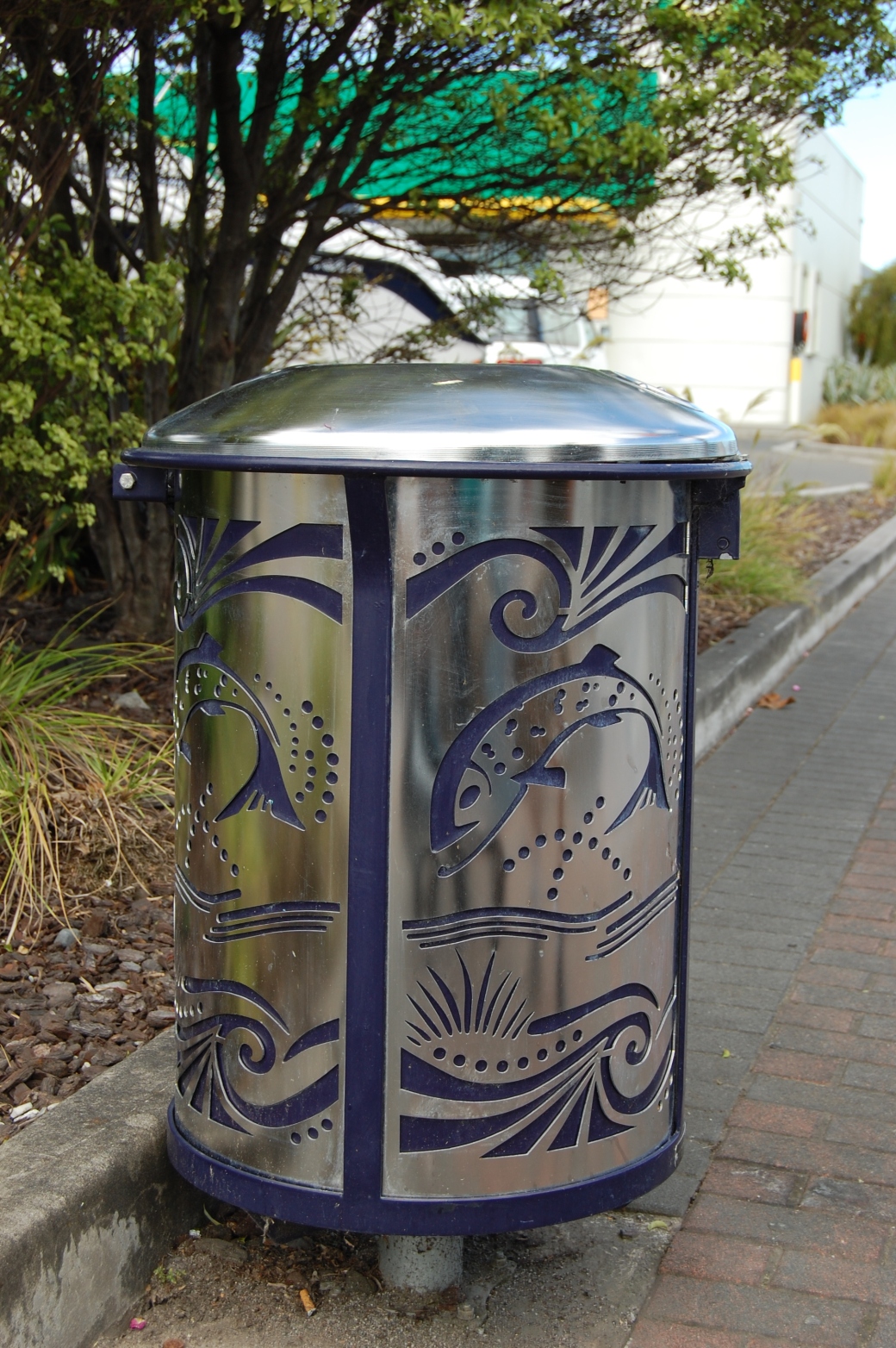 And these are only two, small,  brilliant examples out of many, many…we saw new examples every day.

Hopefully it is not too late for the world – but You and I, and all of us, have to do our bit, our part, every day – to save our enigmatic and fantastic planet. Start with the little things…don’t use plastic bags, bring your own when you go shopping. Don’t throw old medicine in the toilet, in Sweden we leave them at the pharmacy for destruction.

Can you say you try to do everything you can to help? I know I try – but I also know I can do so much more. 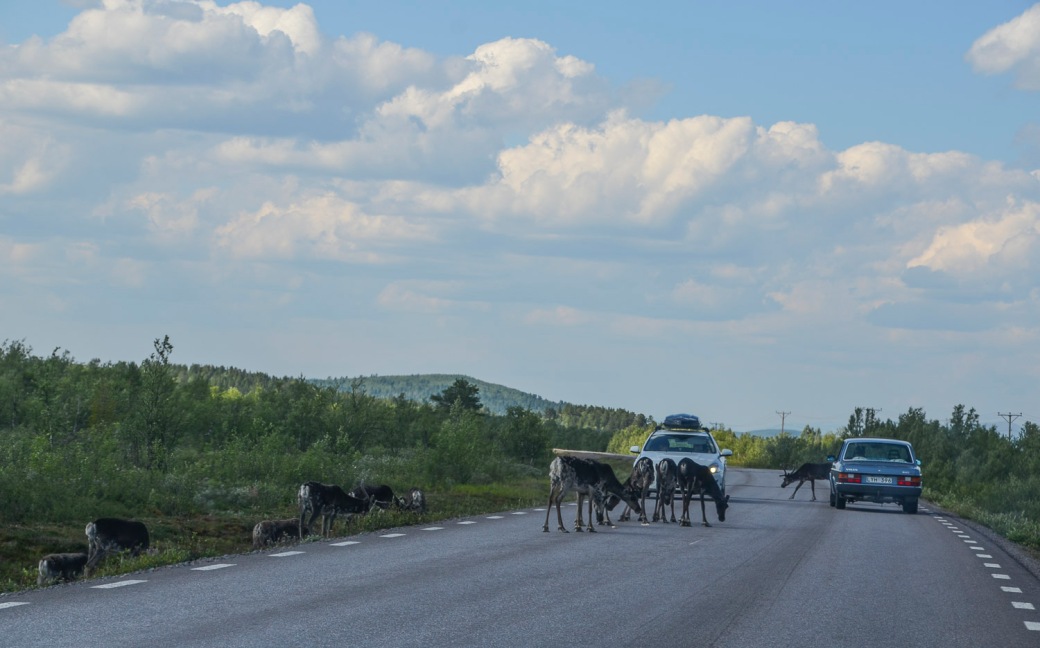 Why do you feed reindeer on the road? Because you have all the time in the world when you are on vacation, because it is fun…and you seem not to care if they get hit by a car. Quite a few of them were limping and were in no hurry to leave the road.