We welcome another guest blogger this week, Miriam of The Showers of Blessings.  She suggests we find reflections to share.

Believe it or not, but I found myself in some of mine…even though I never do selfies.

Reflect upon your present blessings — of which every man has many — not on your past misfortunes, of which all men have some.
― Charles Dickens

Today, International Women’s Day, we might just change his quote a bit…and put in woman and women too.

Can you remember who you were, before the world told you who you should be? 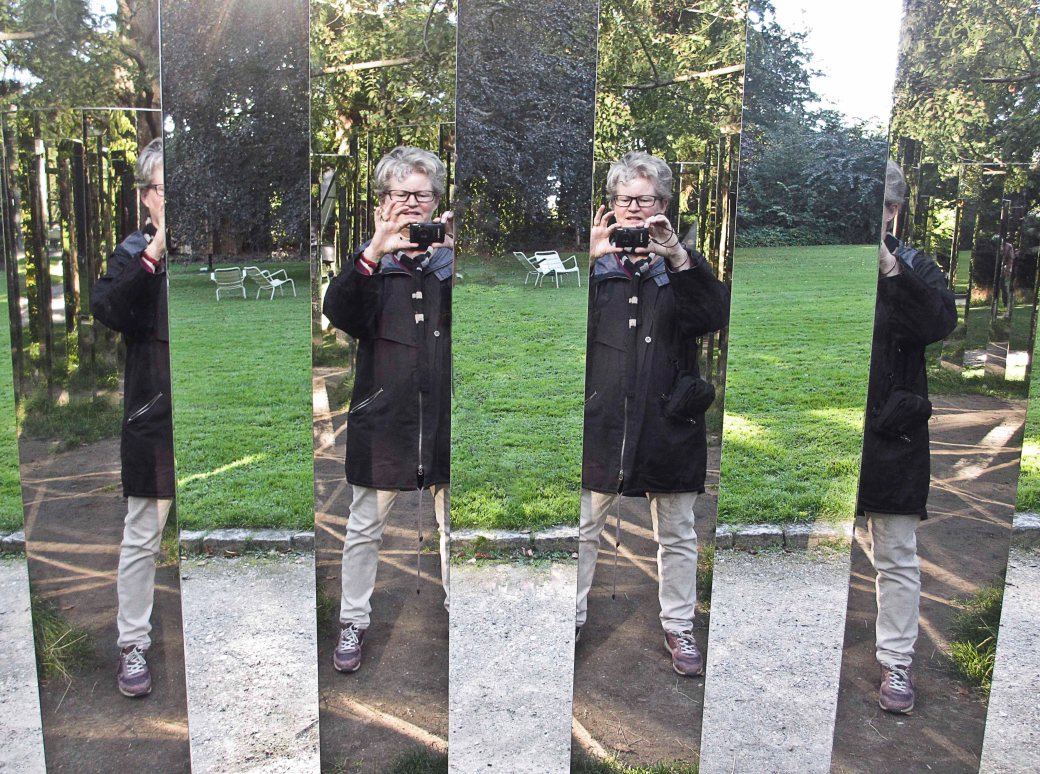 Did you ever wonder if the person in the puddle is real, and you’re just a reflection of him?

Bewilderment increases in the presence of the mirrors.
― Tarjei Vesaas,

When do I see a photograph, when a reflection?
― Philip K. Dick,

A lake is a landscape’s most beautiful and expressive feature. It is Earth’s eye; looking into which the beholder measures the depth of his own nature.
― Henry David Thoreau, 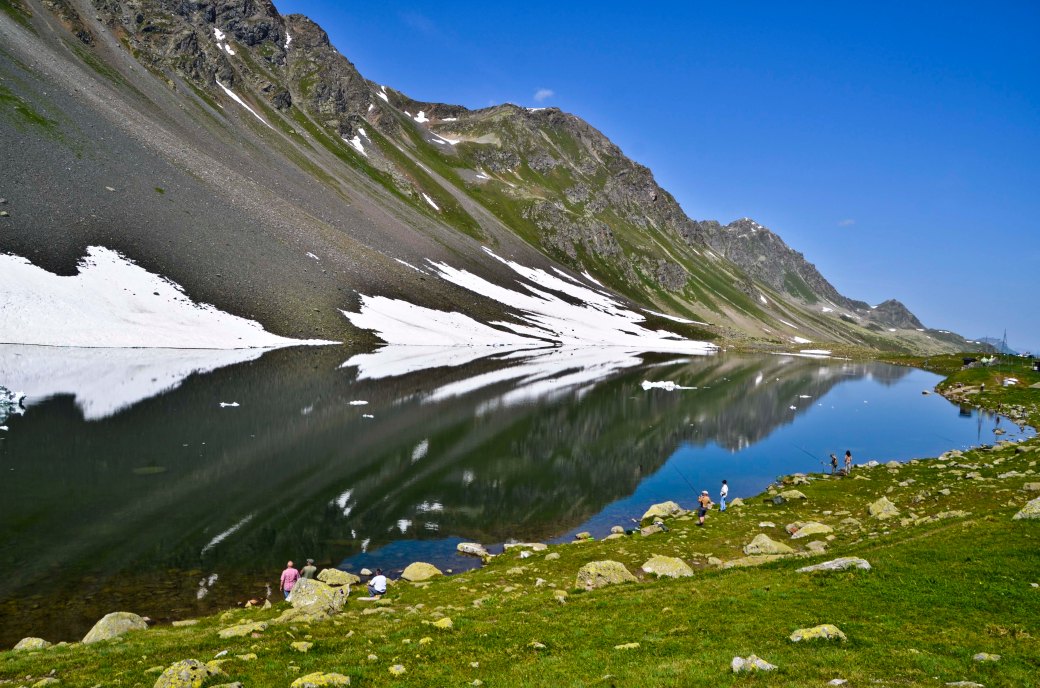 These images were made in Iceland, Stettin, Copenhagen, Bilbao, Norway and Switzerland. As usual, click to enlarge.

For the rest of March, we will follow the usual schedule – and stay tuned for next Saturday when the host is me, Leya!

This week Tina is asking us for something Cold – and cold it is in Sweden now. But where I live it almost never gets below -20C. In recent years the climate has changed and our winters send us very little snow, and temperatures mostly around zero (+-0C). Gone are my childhood days when skiing was a winter joy.

For some real cold, I must go up north visiting friends or my daughter in Umeå. For many years we went to Dalarna to ski, but not anymore. So Tina, I will venture up north and to Iceland – for the real thing. In the header, Gullfoss, and I believe the coldest moment ever in my life.

What good is the warmth of summer, without the cold of winter to give it sweetness.

My old apple tree and a Bullfinch. And yes, I do love winter – when it is Winter.

To appreciate the beauty of a snowflake it is necessary to stand out in the cold.
– Aristotle

A warm house in a cold winter night is another name for paradise!
― Mehmet Murat ildan

It’s too cold outside for angels to fly.
― Ed Sheeran 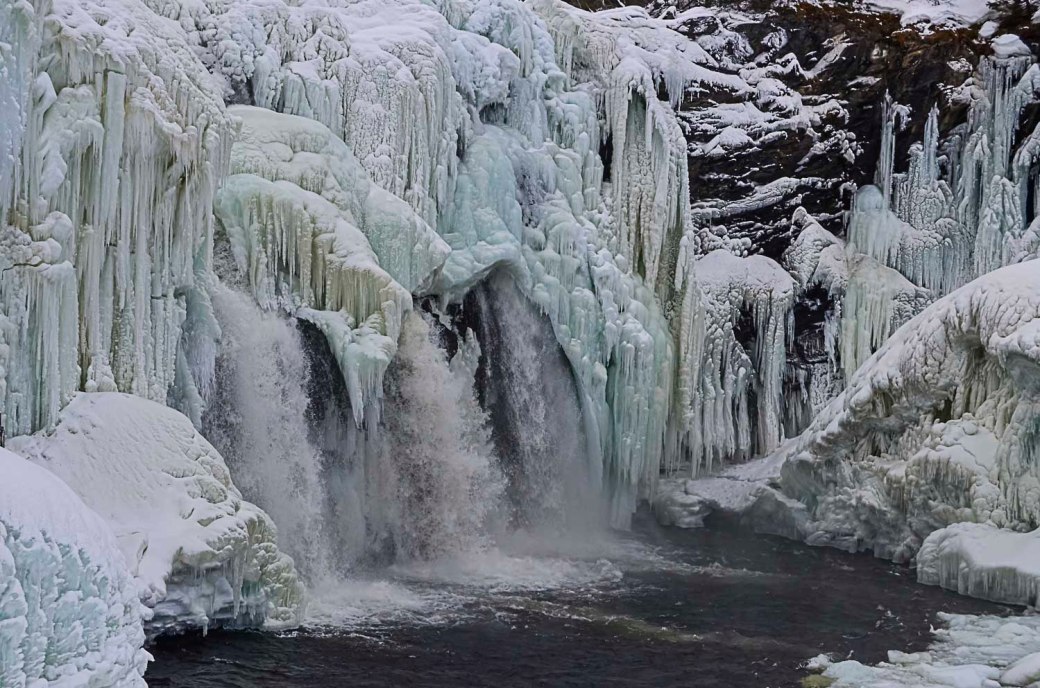 And last, of course, the beautiful Tännforsen, Jämtland, Sweden. Our highest fall, 37 meters and 60 meters wide.

Many thanks to those of you who responded to Amy’s “waiting” challenge.  Our waiting was well rewarded…we so enjoyed your creativity! As always Amy, Patti, Tina and I greatly appreciate your support of our challenge.

Finally, for those who celebrate, we wish you a wonderful Thanksgiving surrounded by those you hold most dear. Next week it will be Patti’s challenge #74 – so stay tuned. 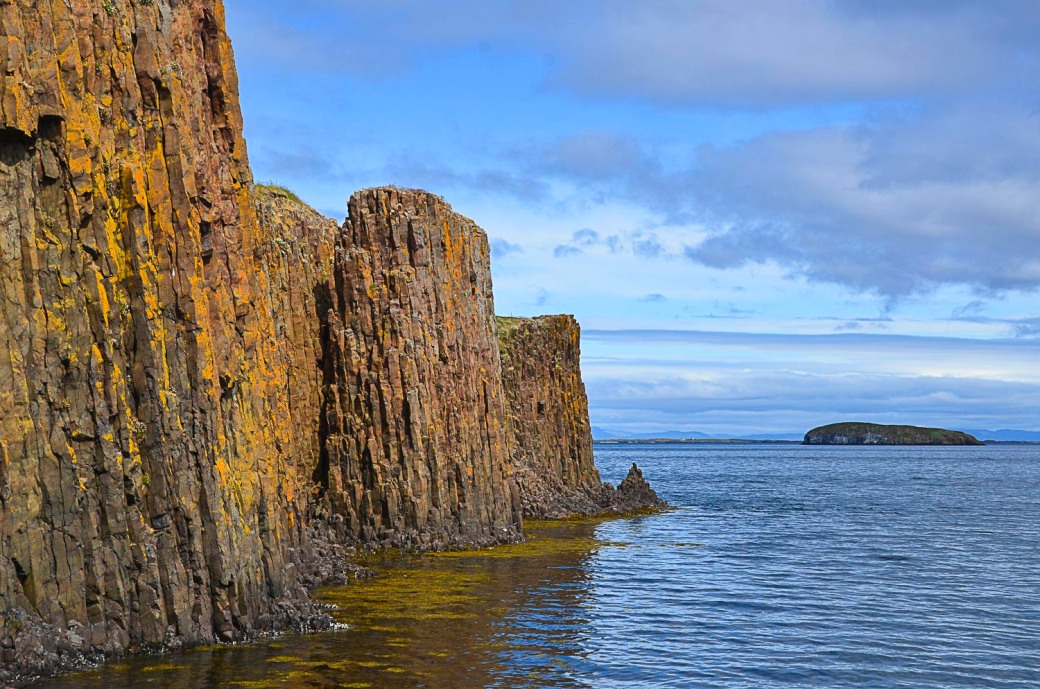 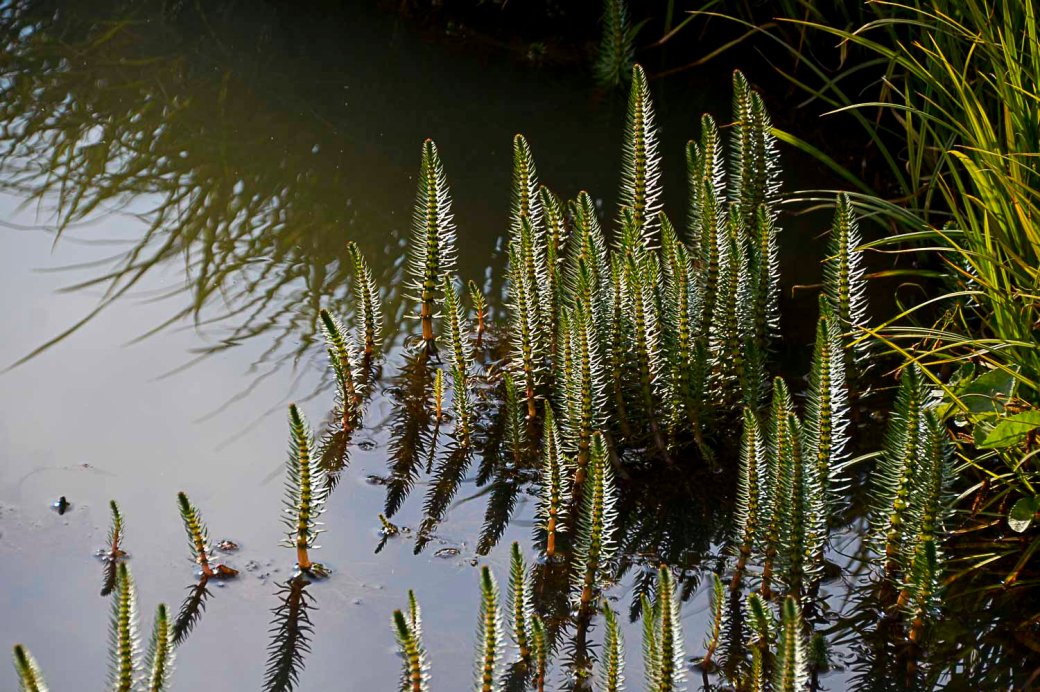 Last week Amy challenged us to share images of the countryside and/or a small town. This week Tina is hosting, and she is ”…asking you to look a bit farther afield. Each of us at some point has visited a place that holds special memories. It may have been a small town, a big city, or even better, an entire country.  We’d like you to capture the spirit of a place that is vivid in your memory. What was it that drew you in and why did it capture YOUR heart?”

I guess many of you already know where my heart lies – Iceland. I have been returning to this country again and again, for more than 30 years now. There is no end to the fascination. This is my attempt to find out Why.

The mountains and glaciers

The volcanoes and geology

And maybe most of all – the Light

There is so much more of Iceland to love – horses, waterfalls, lava landscapes, hot springs… and beautiful Reykjavik with Hallgrímskirkja of course.

Hopefully you are all inspired by now – Patti, Tina, Amy and I are looking forward to seeing your special places!

Hvalfjörður is situated in the west of Iceland, and the fjord is approximately 30 km long and 5 km wide. The place has an interesting history. 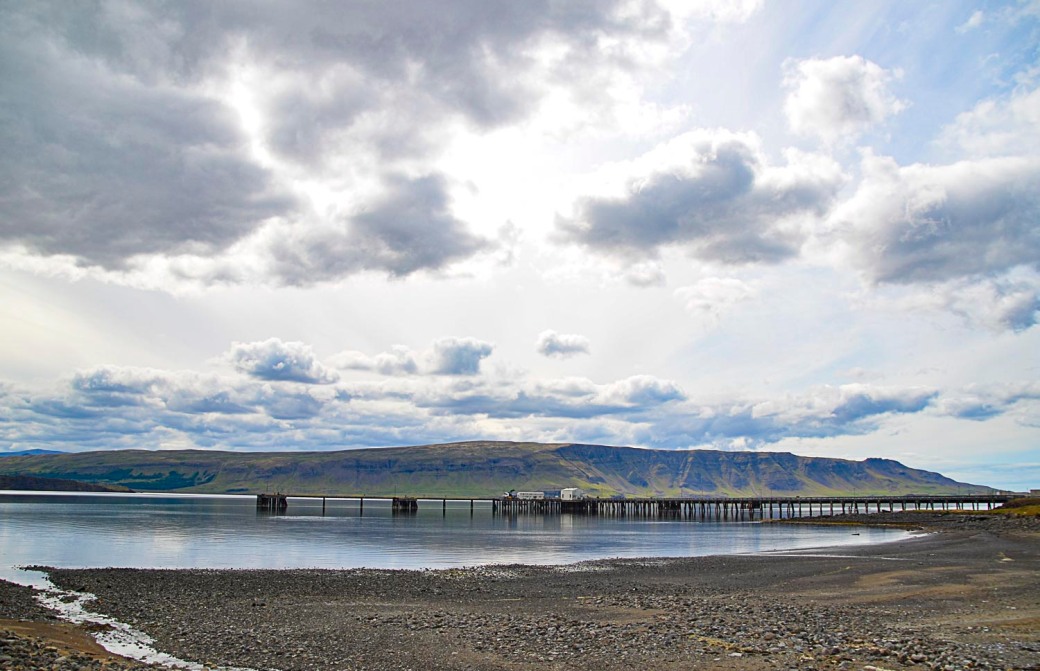 During WWII, a naval base of the British and American navies could be found in this fjord. One of the piers built by the United States Navy is today used by the Hvalur whaling company for the processing of fin whales, partially for the domestic market, and mostly for export to Japan. None of this in 2019 though. 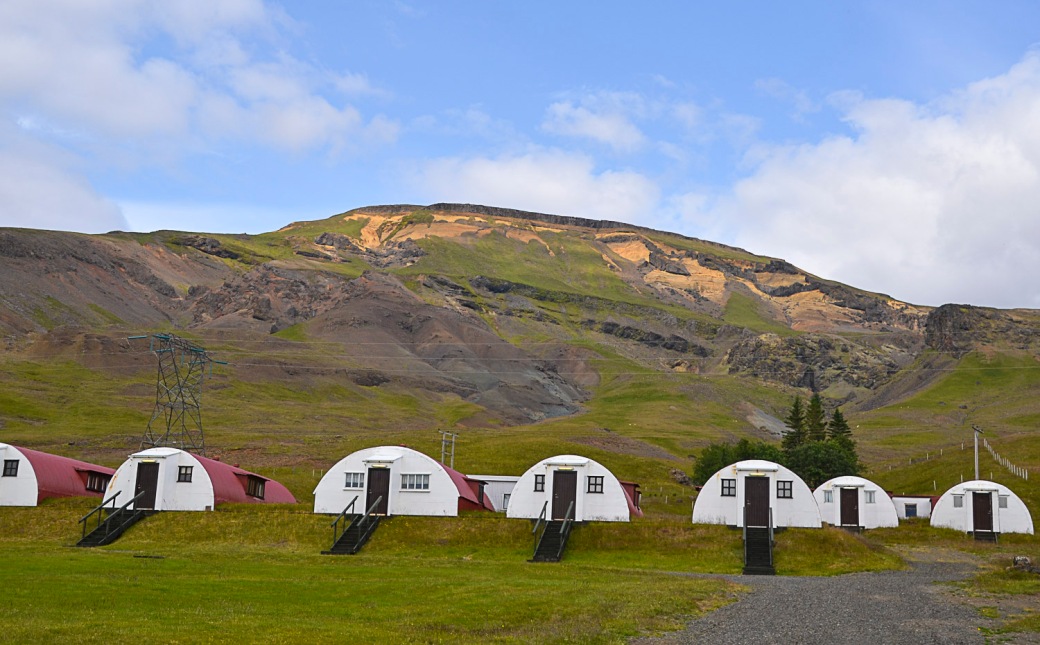 The origin of the name Hvalfjörður is uncertain. Certainly today there is no presence of whales in the fjord; while the only whaling station in Iceland is still located here. In the past the fjord also contained many herring fisheries.

Today the old buildings, and some newer ones,  are still standing for the workers at the station, even if there were no workers this year. Only goats…

Outside the main building, we came across this lovely man and could ask him about old times, the navy men, the whales and the Japanese workers. In fact, as a young man he had worked as a whaler here himself. Now he was just trying to repair and maintain the houses.

Some of the small houses looked inhabited and we could see through the windows how cosy they were inside. A bit small, but much better than a tent. They could maybe be rented by tourists? I asked – but no, the government did not allow that. The huts were deemed too simple. We learned that they had no toilet and no kitchen. There was this main building for that purpose.

To me, Magical goes well with Countryside – I am a country girl. Even if I love to visit big cities, I know where I belong. This week, Amy is our host, and as I often post about my own countryside, you will get some pieces of Icelandic countryside instead. Iceland is a bit more harsh and rough, and we remember – once Iceland was only for the tough guys.

I consider it the best part of an education to have been born and brought up in the country. – Amos Bronson Alcott

The country is lyric, the town dramatic. When mingled, they make the perfect musical drama. – Henry Wadsworth Longfellow

I long for the countryside. That’s where I get my calm and tranquility – from being able to come and find a spot of green. – Emilia Clarke

I really feel that my body craves to be in the mountains or by the ocean or in the countryside. – Miranda Kerr

I lived in solitude in the country and noticed how the monotony of a quiet life stimulates the creative mind. – Albert Einstein

The country life is to be preferred, for there we see the works of God, but in cities little else but the works of men. And the one makes a better subject for contemplation than the other. – William Penn

Thank you for all your Magical posts last week – they made every day into pure Magic!

In Jules Verne’s  A Journey to the Center of the Earth, Stapi is the last stop on the route the protagonists take before they climb Snæfellsjökull and enter the interior of the planet through a tunnel in the crater. 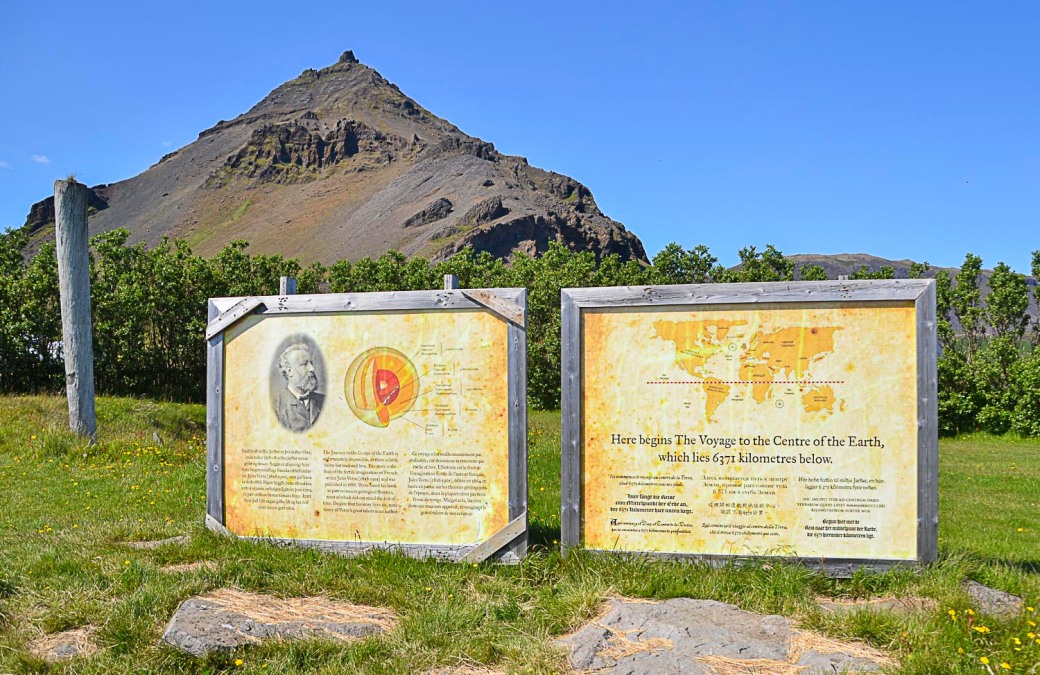 We didn’t intend to try any of these possibilities, but to hike along the coast line of the peninsula from Arnarstapi  to Hellnar. 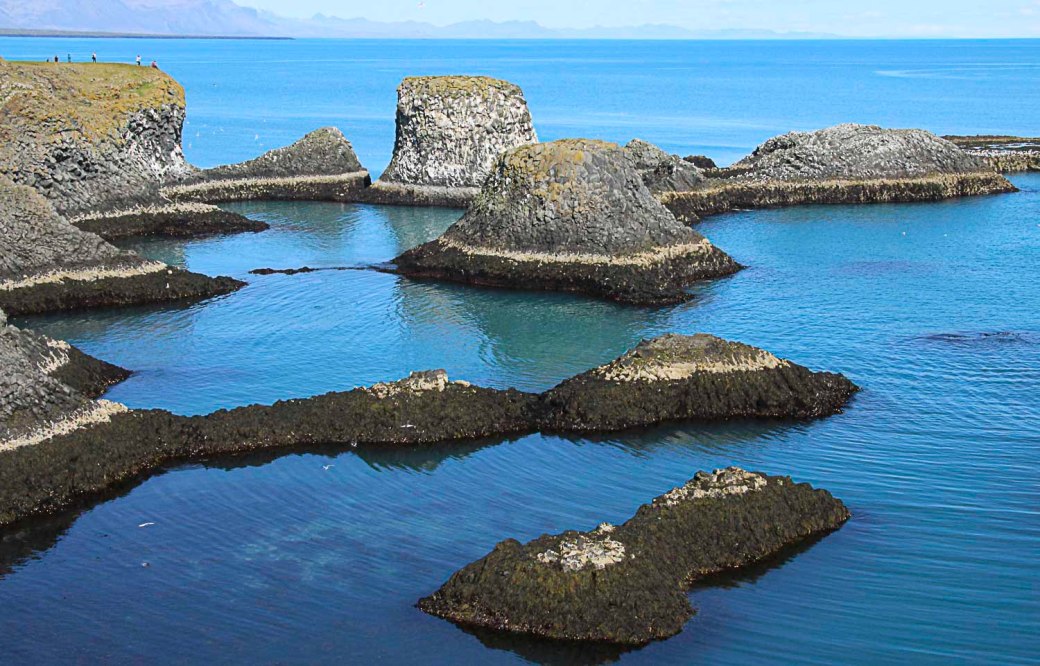 We encountered (I think you could say that…) spectacular landscapes this morning – the likes of nothing I had seen before.

Amazing colours everywhere, almost no fellow hikers, sun, blue skies and no wind. Who could ask for more?

The further we went, the more the landscape opened up and the magnificent coastline became visible – with all its small rocks and islets – 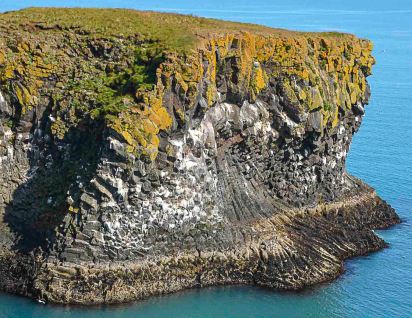 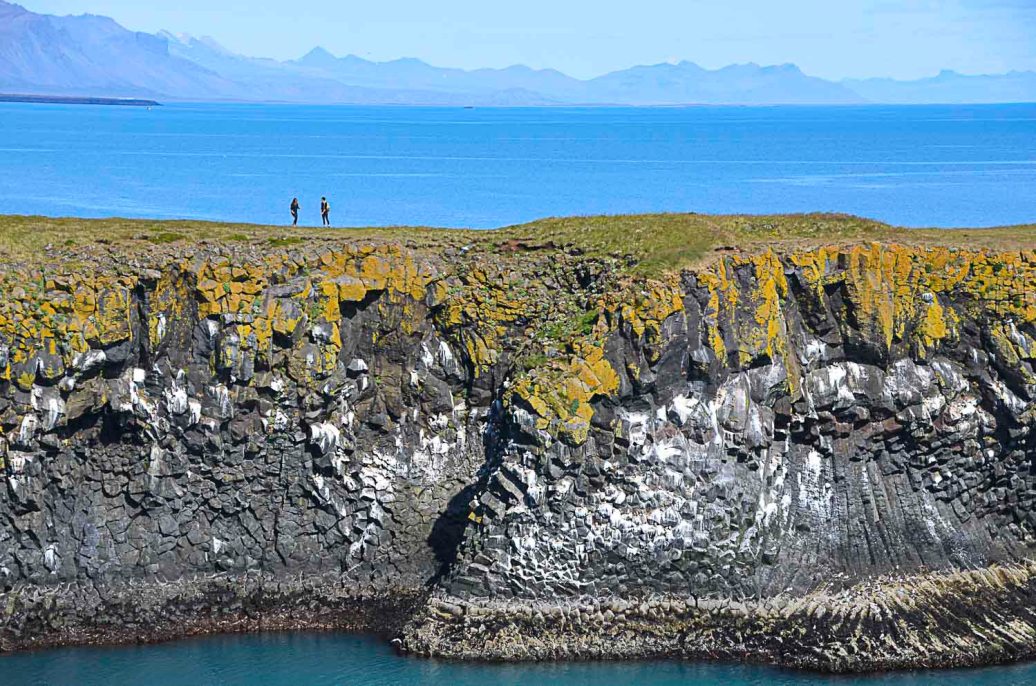 Struggling through some rugged lava formations, I suddenly spotted three killer whales, orcas,  in the blue waters ahead of us. I only got one shot working…then they were gone. But wow, how happy I was! I had never seen them live, in their natural habitat. 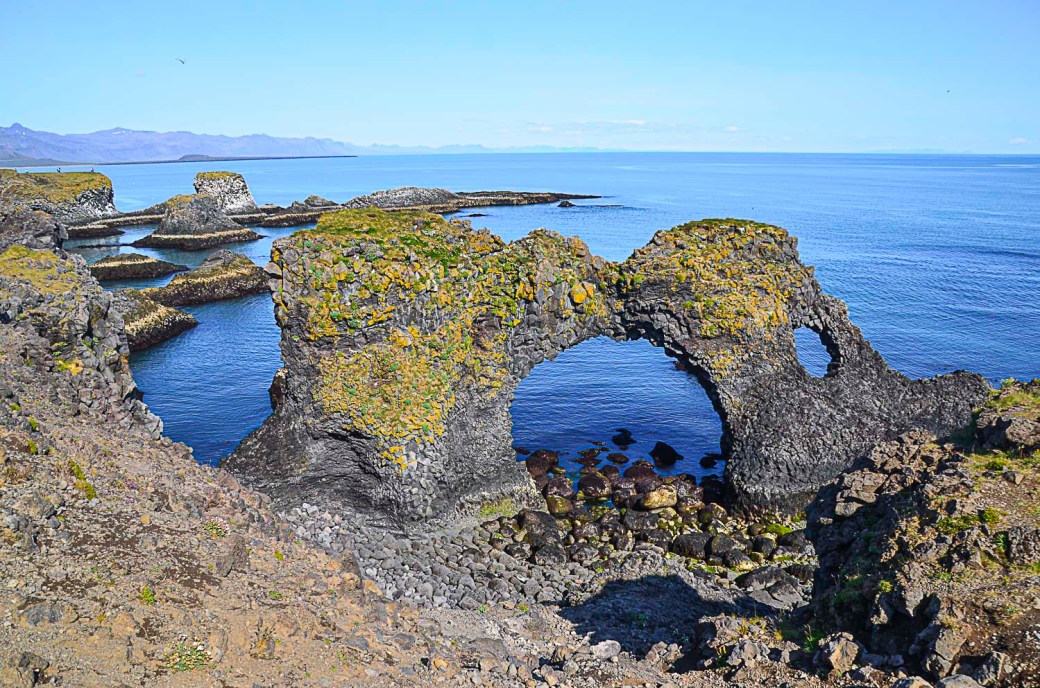 Gatklettur Arch – after some searching, we finally found it on our way back to Arnarstapi.

And the soft evening light kissed the earth. I sat down among the flowers, and listened to the strong feeling of Love for this Country, the stillness in the air, the beauty of this place. I watched the young girl, lying there, contemplating – and wondered if she too had seen the orcas…. To me, they were the icing on the cake this Icelandic summer’s day.

We returned to the two villages, Arnarstapi and Hellnar, the next day – just to savour their beauty once more before heading north… There just might be another post.

Amanda ask us for a portrait of Blue. Blue is not my favorite colour to wear, but in Nature it is Green and Blue for me. And the image had to come from Iceland this summer. 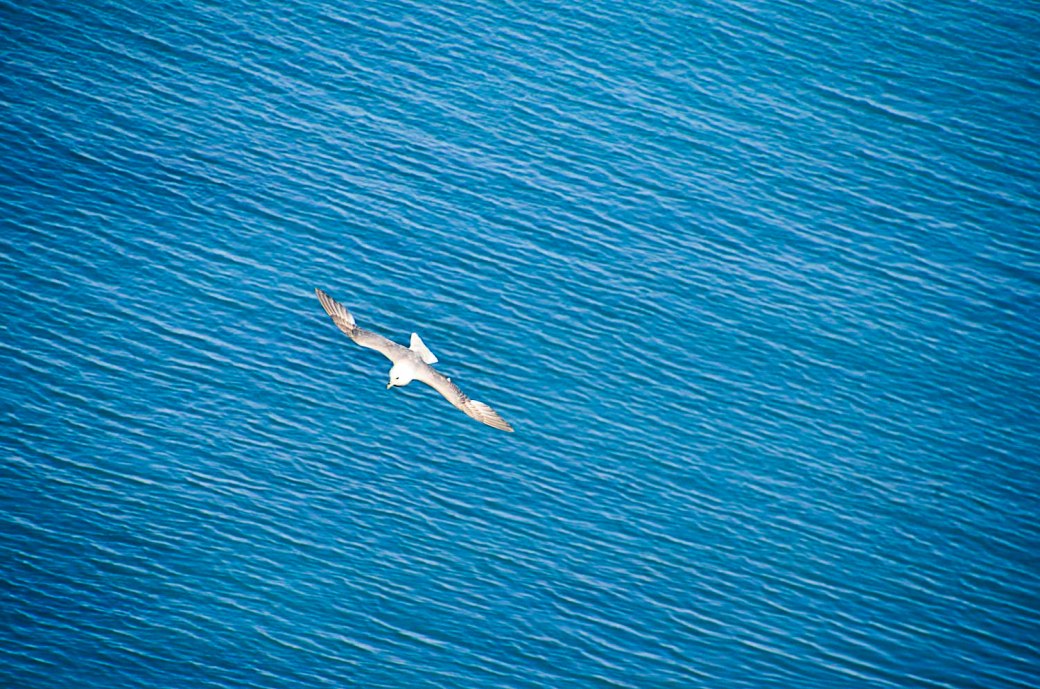 The ‘Friendly Friday Photo Challenge’ is launched every second Friday here at:

Something to Ponder About, and every other Friday at: The Snow Melts Somewhere.