A visit to the Museum of Sketches for Public Art ( Skissernas museum – Arkiv för dekorativ konst), also known as the Archive of Decorative Art, is indeed a pleasant visit. In the Header a suite I loved: Raoul Dufy’s La Fée Électricité (Paris 1937). The Art museum at Lund University in Sweden, is dedicated to the collection and display of sketches and drawings for contemporary monumental and public art, such as frescoes, sculpture and reliefs.

The museum was founded in 1934 by Ragnar Josephson (1891–1966), professor of the History and Theory of Art at Lund University. Josephson wanted to collect material illuminating the creative process of the artist – not only the finished artwork itself. The collection opened to the public in 1941 in a building close to the Lund University Library.

I studied for many years in Lund, saw the sign every day, but never visited. Finally, now I did – better late than never! And it was well worth the visit.

Vatasafn, Stykkishólmur, Snaefellsnes peninsula. This Library of Water, by Roni Horn, opened in 2007 – a constellation of 24 glass columns containing water from some of the major glaciers around Iceland.

In fact, the first attempts to methodically record meteorological conditions in Iceland started exactly here in the mid – 19th century. 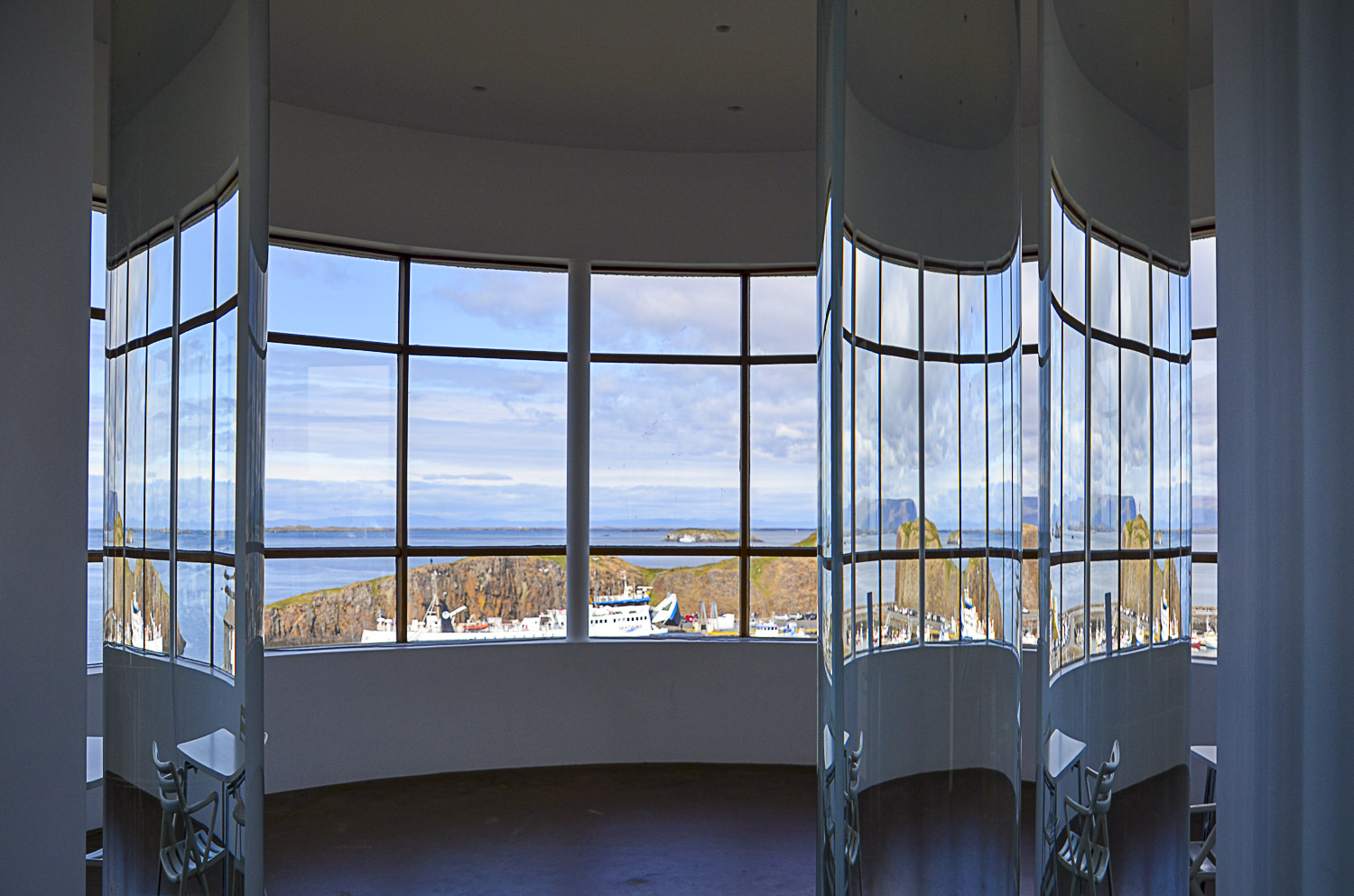 The glass columns refract and reflect the light onto a rubber floor with words in Icelandic and English which relate to the weather. ”You are the weather”, Horn says . 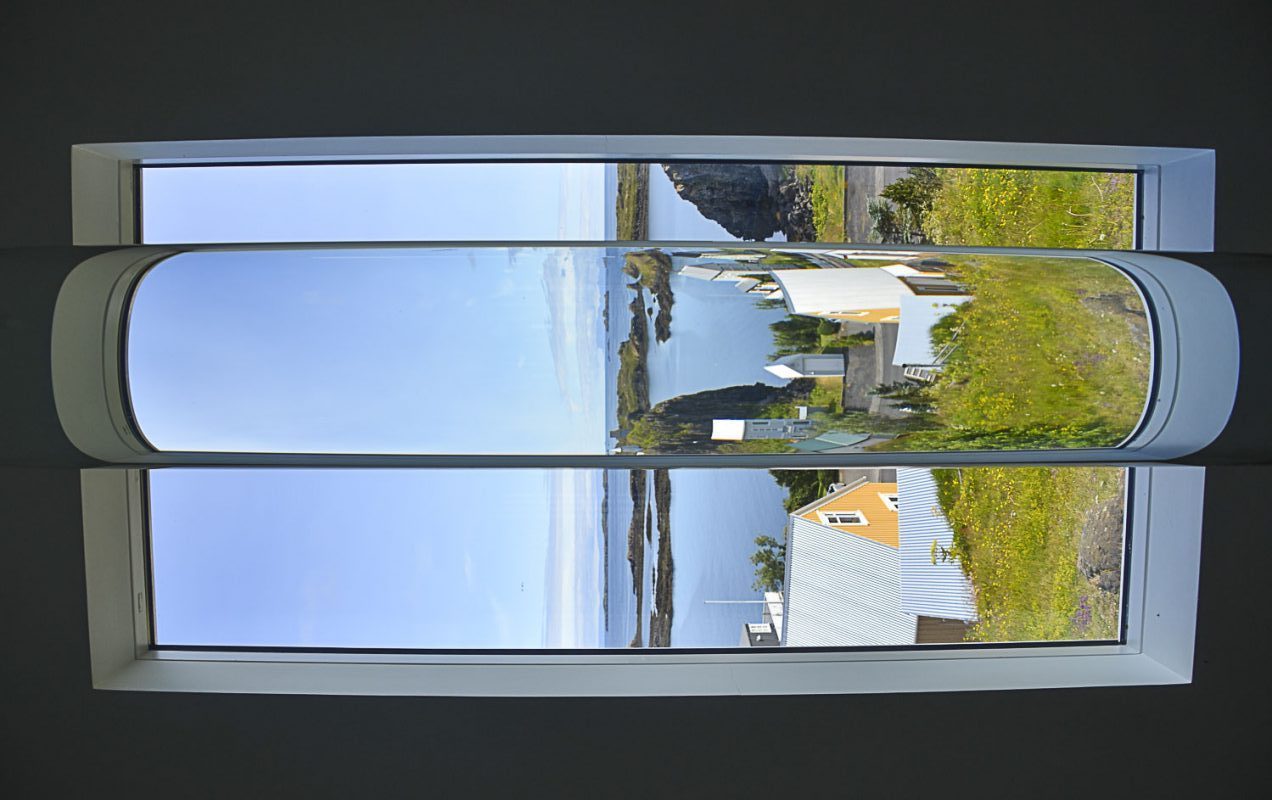 The New York born artist has visited Iceland many times since the mid – 70s, and knows that weather is the prime force in Iceland. Weather often changes mood and personality – good or tough for the residents – but also an important thing to be well prepared for when you visit.

This installation is housed in a pavilion on top of a hill, with spellbinding views of the harbour as well as the surrounding landscape and seascape. I found the Library offers a serene and silent space for private reflection. I easily stayed for more than an hour, alone, but would have loved to come here often.

It takes a whole day to drive down from Narvik to Å, 380 kilometres, and you have to stop several times just to walk out in all that beauty… 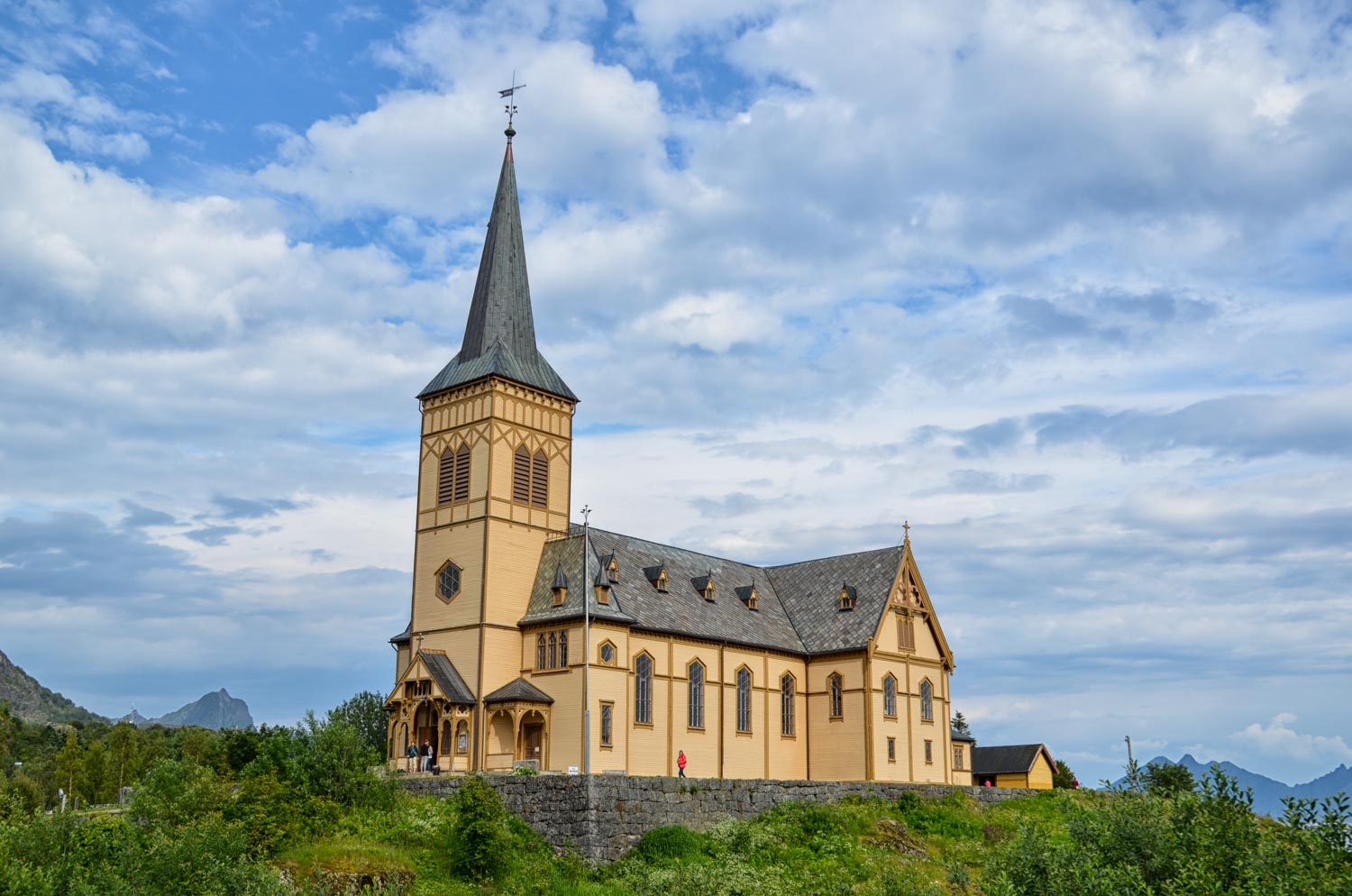 Not far from Svolvær, we reached Kabelvåg, and stopped to admire the grand Lofoten Cathedral (1898) – all in wood – that takes impressive 1200 visitors. Very beautifully built, but in need of restoration and painting now.

Lofotr Viking Museum in Borg is the place where the grandest house ever from the Viking Era was found, and a copy of it was built in natural size.

As the roads grew more narrow and winding, the sun went behind the clouds and was mostly veiled in the soft fog. This, of course, sometimes made the landscape even more interesting. 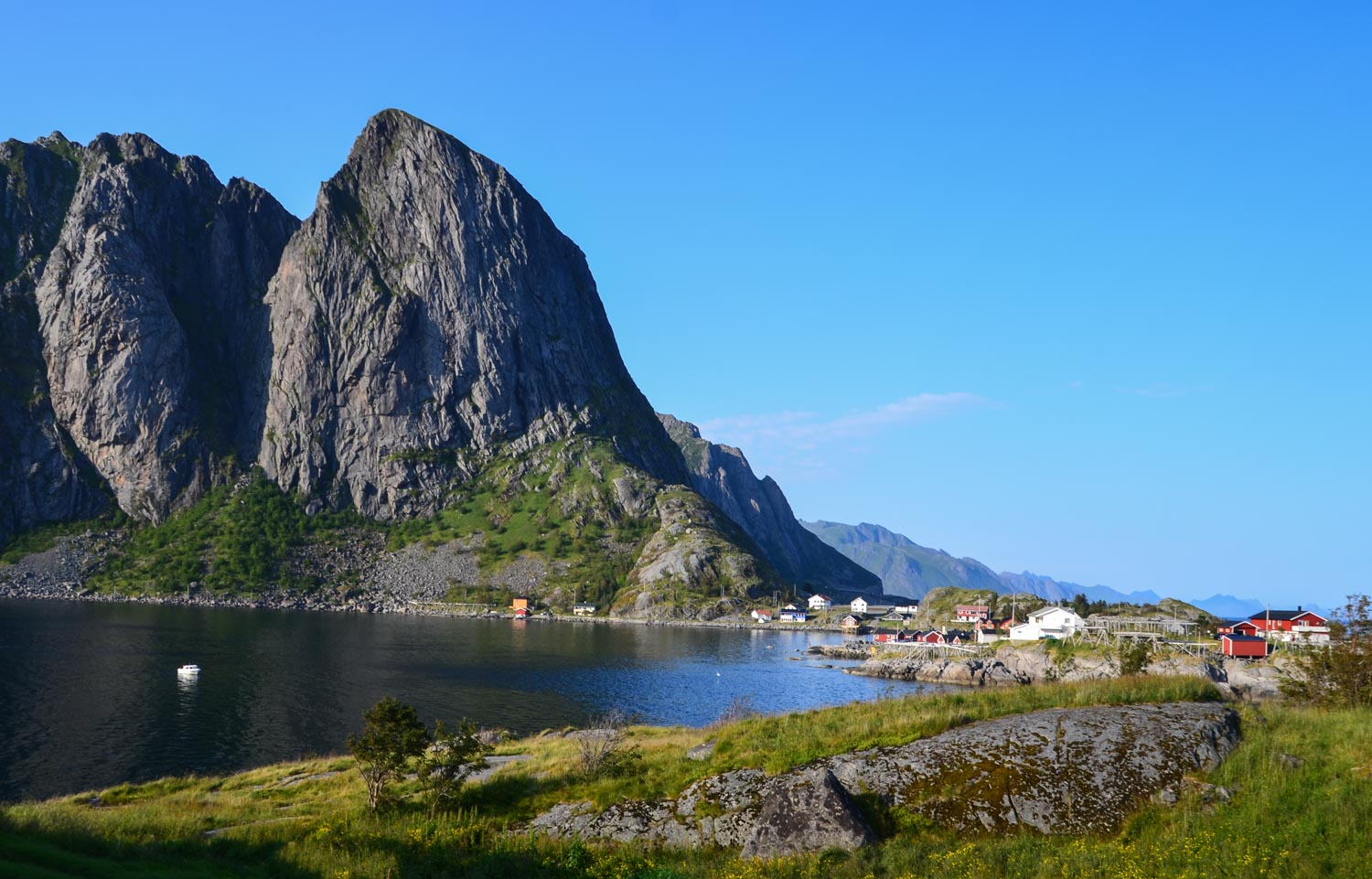 Looking behind us, the clear skies were still there though.

Winding roads among the small islands, and 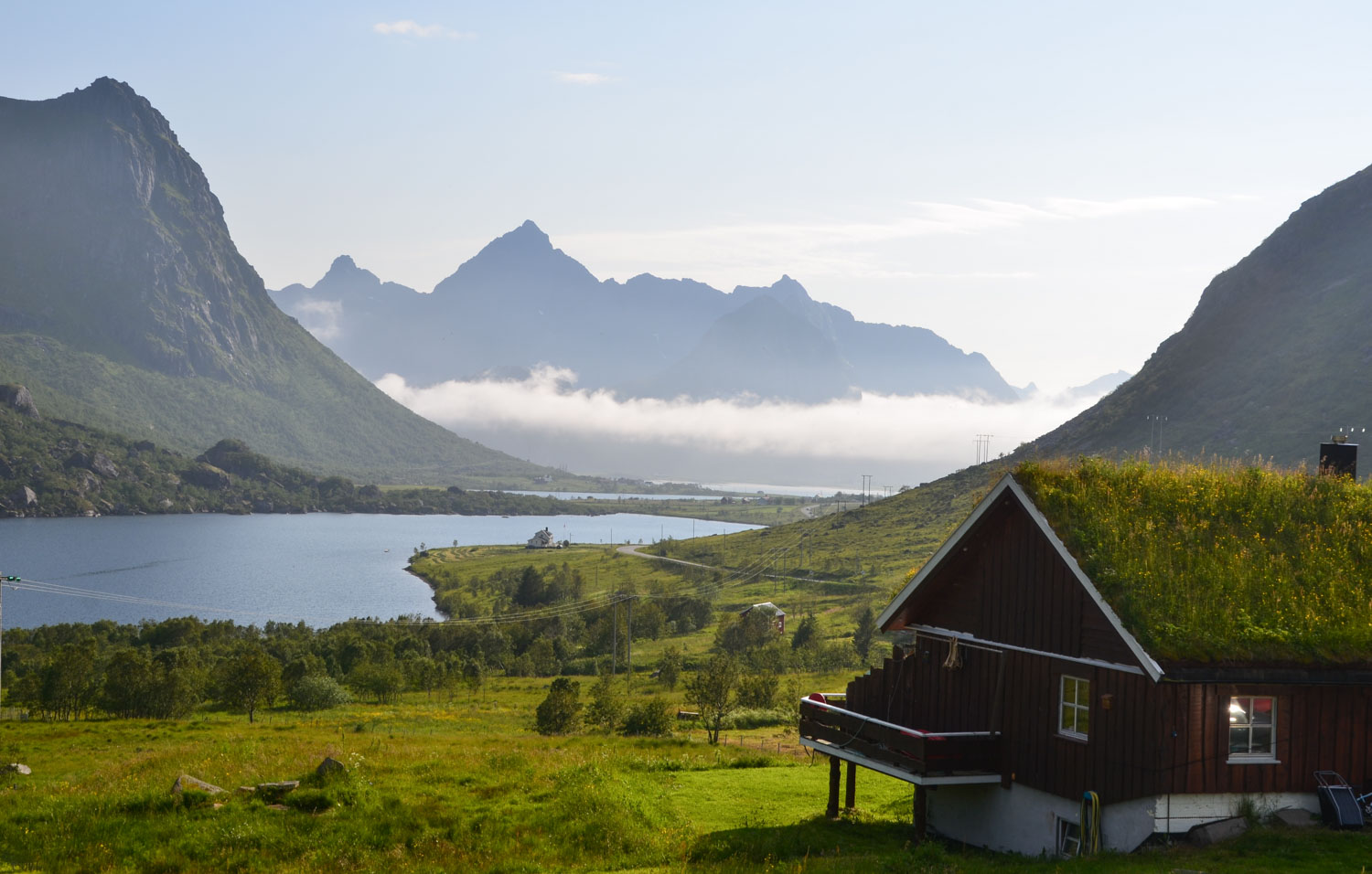 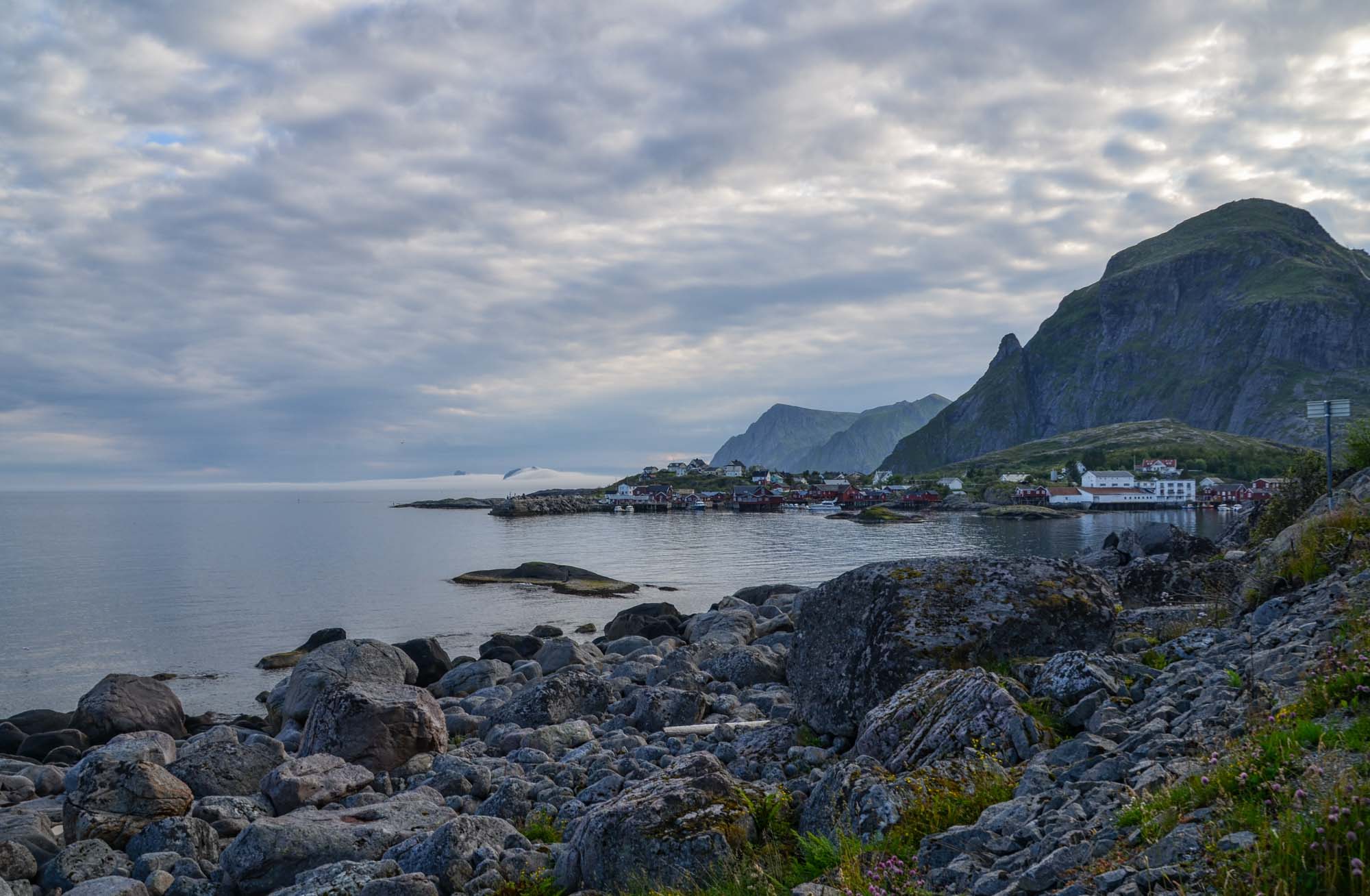 Finally, after being mistaken several times – we reached Å, where we were going to spend the night. Meet more of Å in the next post!

A beautiful place for showing Västerbottens cultural history – Gammlia. The word means ”the old hill”, or ”the old mountain hill”. 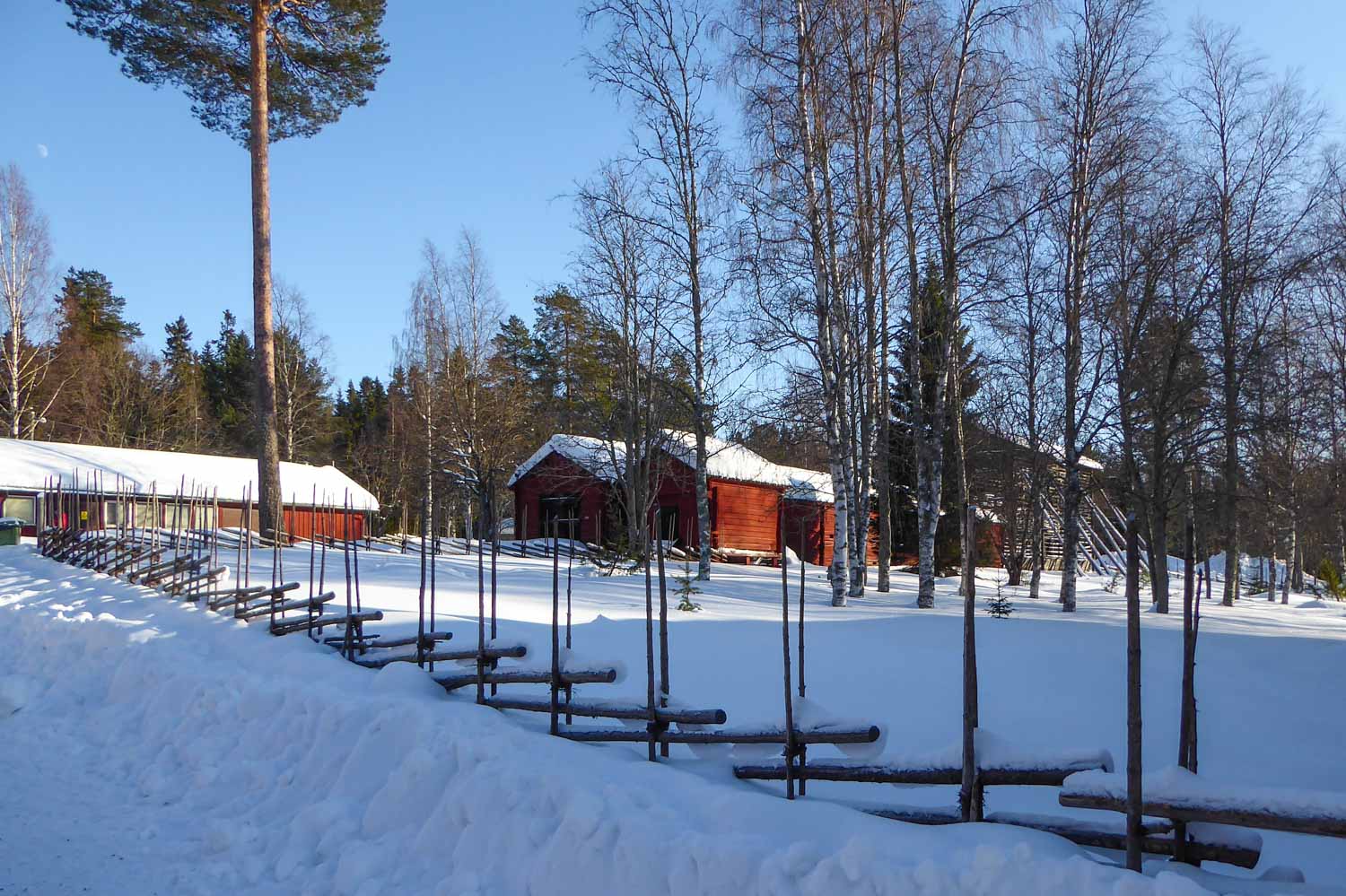 We spent a lovely hour here, walking through the area, enjoying the old houses and  snowy surroundings. My favorite kind of fences everywhere.

Colourful houses in the sunshine 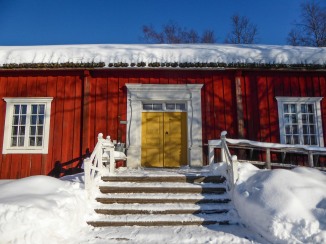 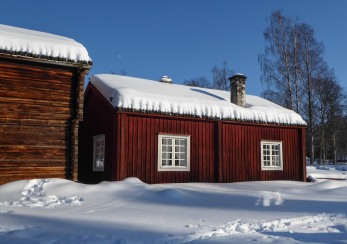 Take a close look at this one…isn’t it Santa Claus over there…?No – a skier!

Who would not fall in love with Helena Elisabeth?

The church has got an interesting story as well. 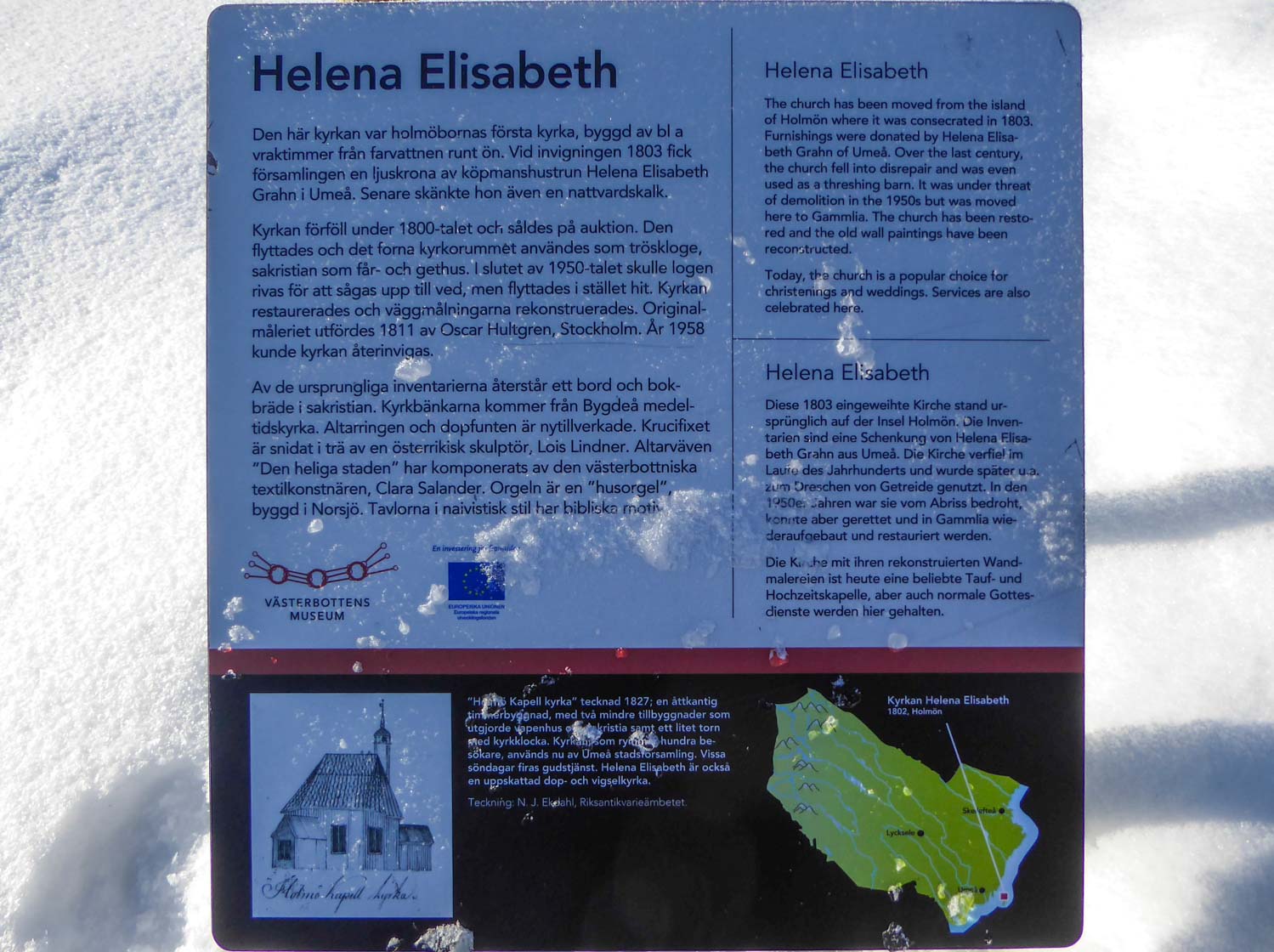 …but only as long as the cold stays.

A short visit to London with my whole family – I cannot say how much I appreciated this opportunity! That we all could go, and have some relaxing fun together – almost impossible now as we are all living in different ends of Sweden.

WIA at Somerset House was our first spot of interest. All of us love working with some kind of art – but none of us do it professionaly. So.. who does not want to get inspired?

The view from Waterloo Bridge – I don’t think I have seen it since the Shard was built. You can see it between the two high constructions on the right side of the Thames. 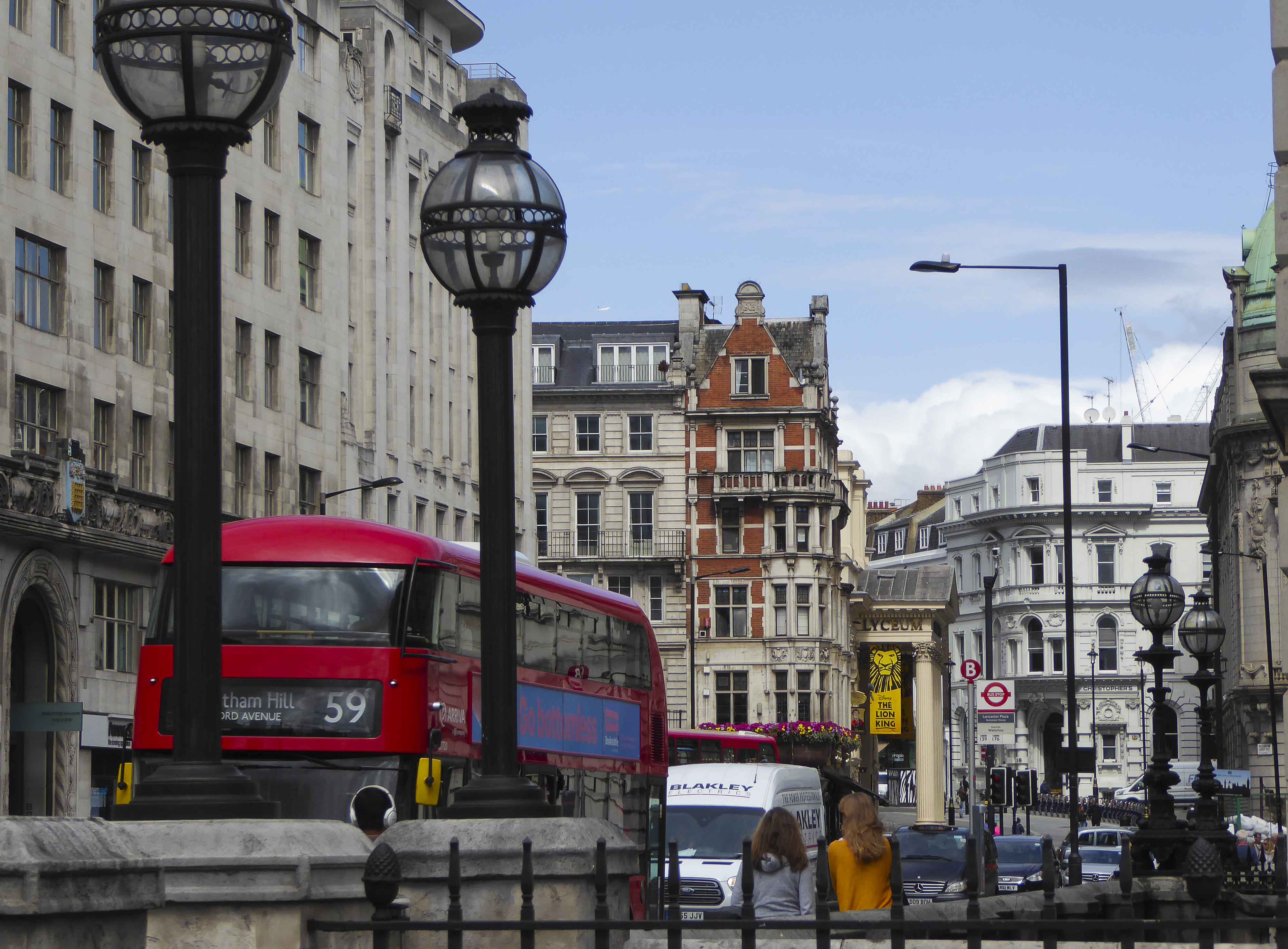 Walking to the entrance of Somerset House, I caught a glimpse of ”The Lion King”. I remember it being very well staged and performed when we visited with our children a long time ago. Sweet memories.

All excited of course – but as I am not allowed to show the photos officially,  Here is a link instead.

My son and daughter photographing away…at the entrance. There were, among others, a great many interesting takes on the US president and environmental issues. 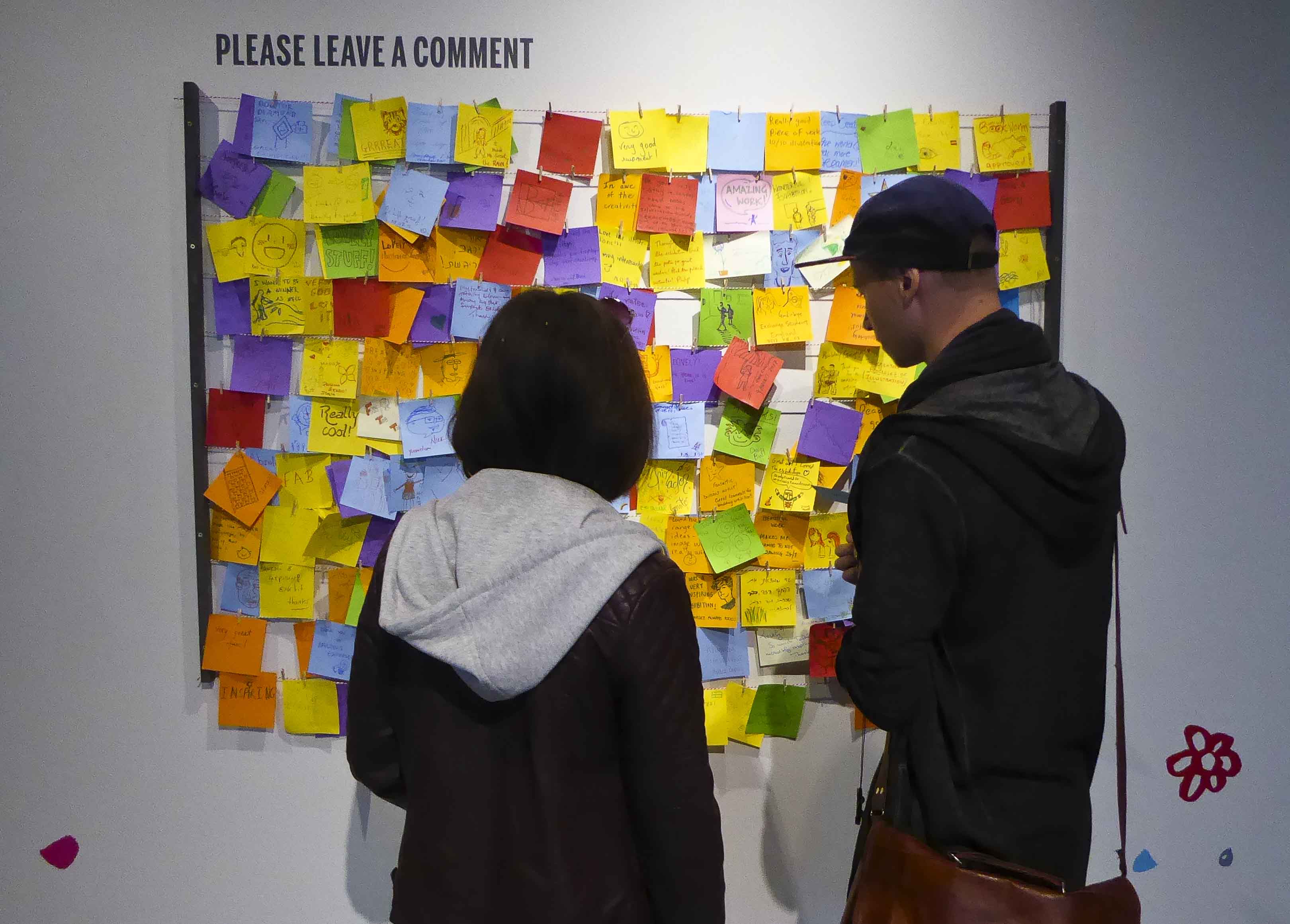 At exhibitions, leaving a comment is never optional…always give feedback! So much talent and fantasy, brainwork and time gone in to these artworks. Brilliant!

Walking back – enjoying the other side of Waterloo Bridge. Always impressive…

…but who did the packing?

This tiny exhibition at Kulturen in Lund was a real hit for me. I  only took a few photos, but hopefully they convey something of what and who they were. Some of their movies  are still on TV every year…and Hasse is still here, even if he does not write or perform anymore. The Apple War and The Simple-Minded Murderer are my absolute favourites.

Nostalgia…yes, but they will never die! Hans Alfredsson and Tage Danielsson – the number one comic artists of Sweden, the best critics of politics and politicians, the front figures working for a better world and environmental awareness. They brought out the best in people…by using their extreme talent for words.

Unfortunately this kind of sophisticated humour does no longer exist. (People are not good at words anymore…) Word jugglers, enthusiasts – ask any Swede my age, and they can recite something from ”Om sannolikhet” (”On Likelyhood”) 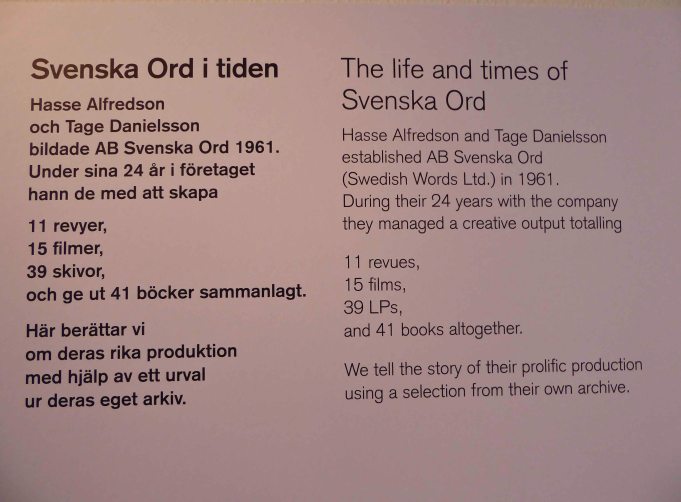 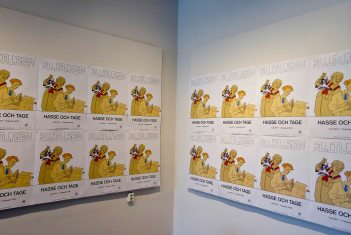 the small exhibition is in Lund, at Kulturen 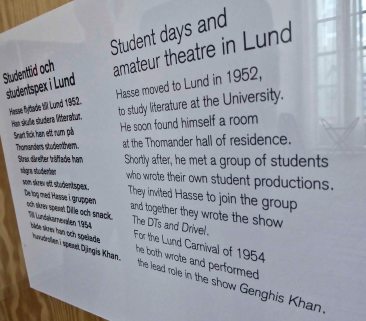 I studied at Lund Uni for several years… 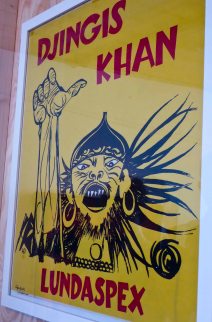 Today’s exhibition was a real hit – Erik Johansson at Dunkers in Helsingborg. I just never wanted to leave…so, please take a look at his surrealistic photos! If possible – go to Dunkers yourselves and have a great experience, inspirational and mindblowing. 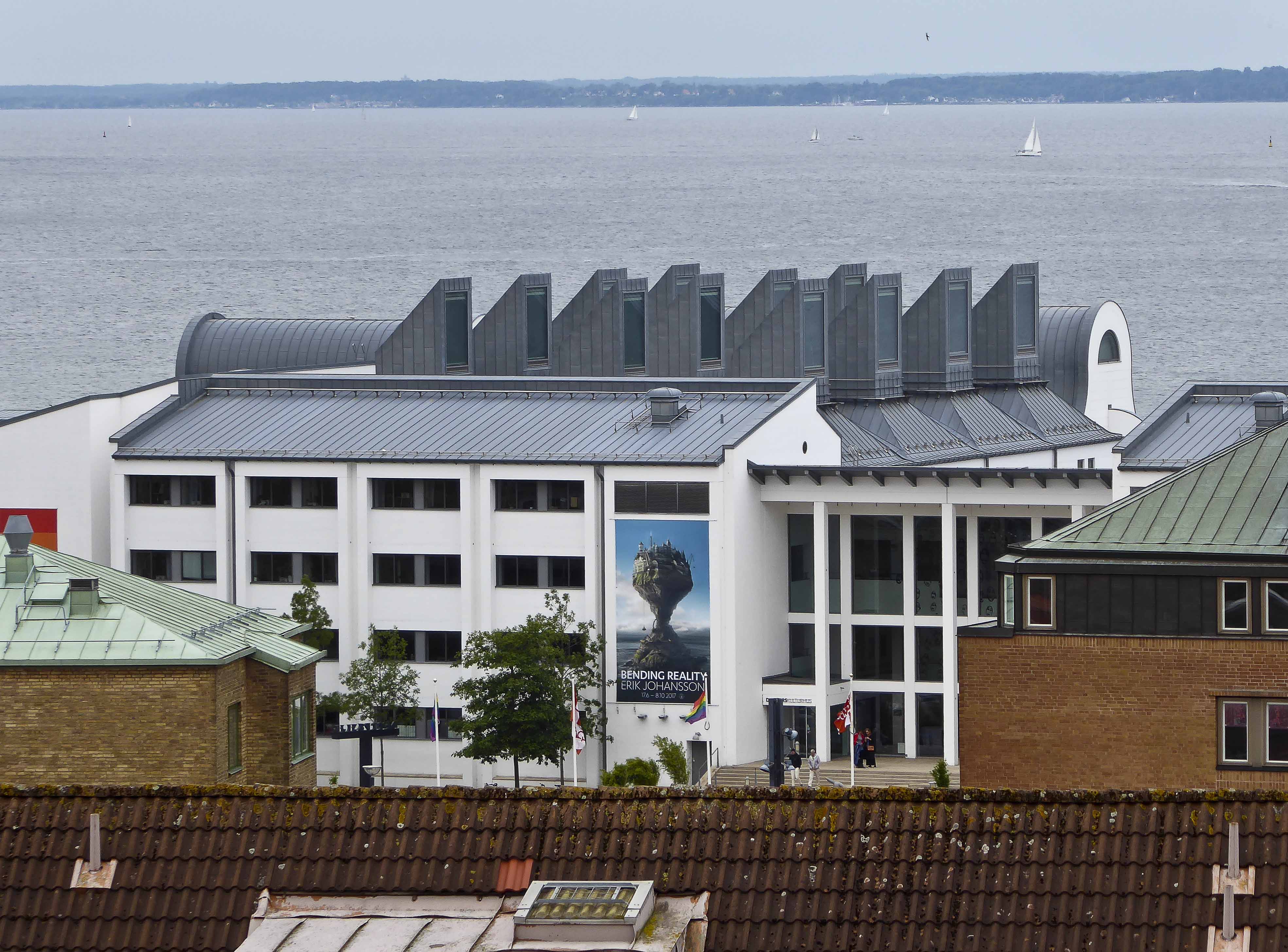 Erik’s work is not unlike the works of another artist I admire – Yacek Yerka. The latter paints in acrylic, and Erik is a photographer. Both to my taste! 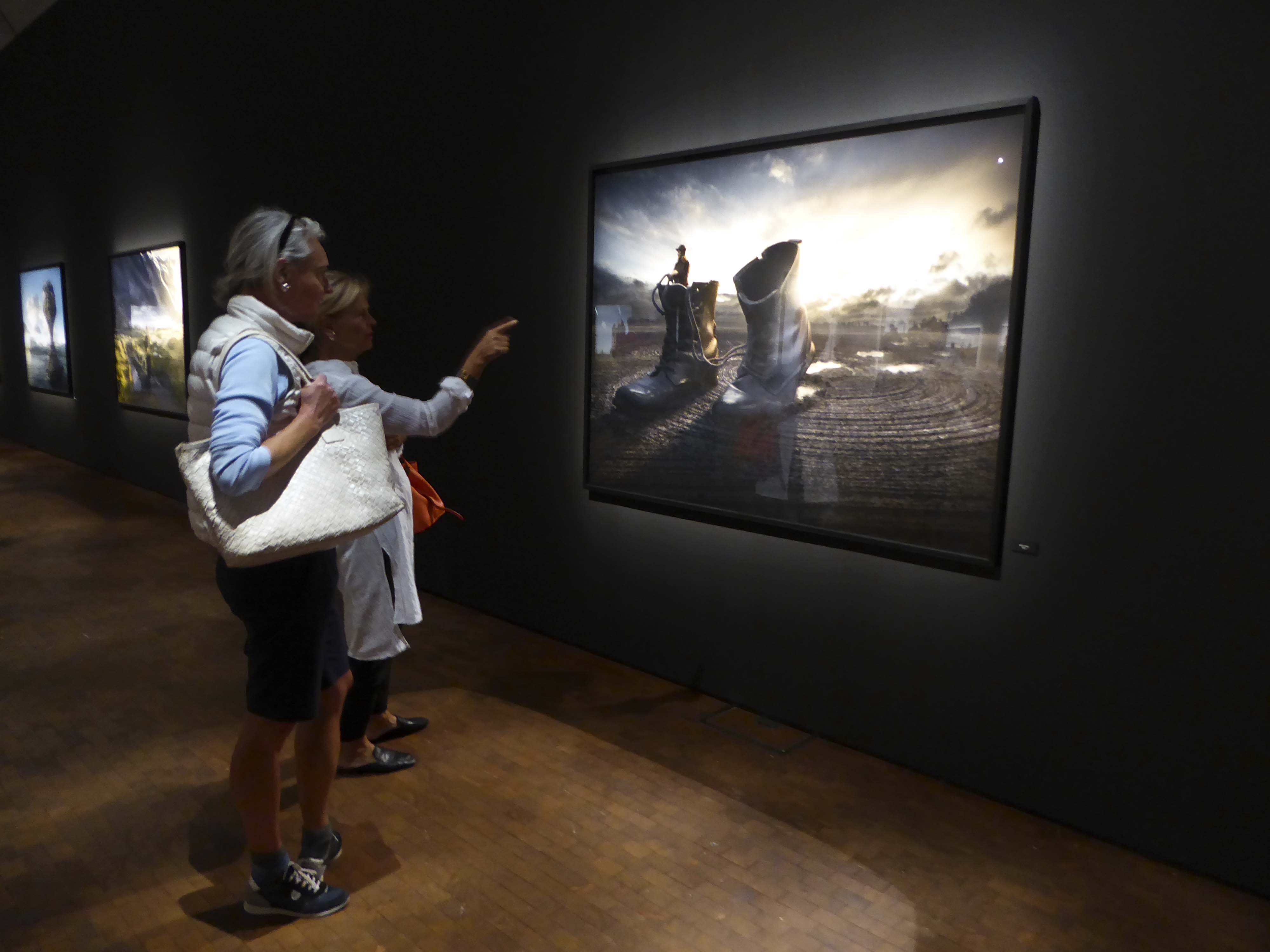 What do you think?

In the header, the tunnel of film story in Sweden.

…and Spring of course!

Our little town is right now the lucky host of the only exhibition of Carl Larsson’s art outside Dalarna and Sundborn. A visit to this tiny, but exquisite, exhibition was on the menue today. Our 39th wedding anniversary.

Carl Larsson (28 May 1853 – 22 January 1919) was a Swedish painter representative of the Arts and Crafts Movement. His many paintings include oils, watercolours, and frescoes. But, when we think of Carl Larsson – we first of all think of his watercolours of his wife, children and home at Little Hyttnäs, Dalarna.

He considered his finest work to be Midvinterblot (Midwinter Sacrifice), a large (6-by-14-metre oil painting completed in 1915) painting now displayed inside the Swedish National Museum of Fine Arts.However, this great work was at first rejected by the board of the museum, and later sold to Japan. The fresco depicts the blót of King Domalde at the Temple of Uppsala. Decades later, the painting was purchased and placed in the National Museum, on the wall it once was intended for.

Carl Larsson was born on 28 May 1853 in the old town of Stockholm, at 78 Prästgatan. His parents were extremely poor, and his childhood was not happy. His father told the young boy that he ”cursed the day he was born”. A younger brother of Carls´ was the much loved son, but he died at an early age. Throughout his life, CL could never forget his father’s words…and…

…with him was forever the wish for being loved. Much loved.

For some years he and Strinberg were great friends… 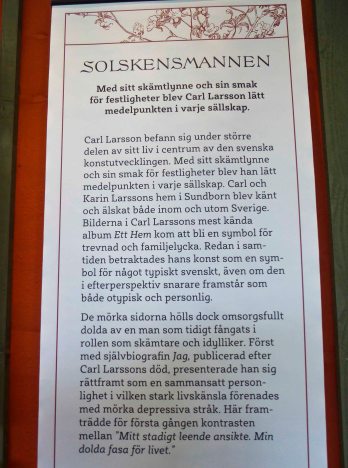 …but Strindberg misunderstood the painters wish for love and recognition.. 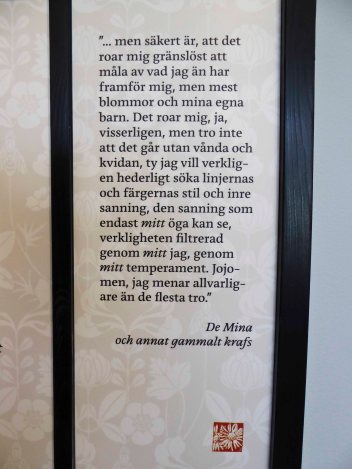 …and terribly let him down

And he found his great love in another young artist, Karin Bergöö, whom he soon married. Together they worked in perfect harmony – he painting and she designing and working mostly with textiles. She bore him 8 children. 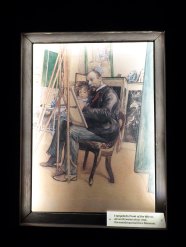 …were popular with CL 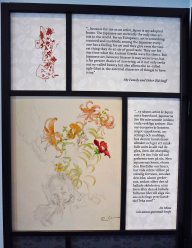 A beautifully written Love for Japan and Japanese Art

My favourite CL painting. This window is what I dreamt of having in my own home when I grew up!

Through their paintings and books, Little Hyttnäs has become one of the most famous artist’s homes in the world. The artistic taste and harmony of its creators made it a major line in Swedish interior design. Despite its controversialness to the style of the time. The descendants of Carl and Karin Larsson now keep the house open for tourists each summer from May until October.